Makoto jumps away from the opponent, then kick-jumps from the edge of the screen and aims a flying kick at them. If this connects, she will knee her opponent in the stomach and perform a spin kick, all while shouting the move's name, and finish with a Fukiage which sends the opponent flying.

In the Street Fighter IV series, the player can hold any kick button during the move to change the angle of the first hit, with light kick going the shortest distance and heavy kick going the farthest.

Makoto can immediately dash out of the move and continue the combo in 3rd Strike, which leads to some very damaging setups. Makoto performing a Karakusa in the corner with enough meter stocked could let her stun an opponent in a single combo, and with enough meter, could even KO them off a single command grab.

The move's inclusion in Super Street Fighter IV was seen as a way to give Makoto a way to fight back against projectile users but it was found the move was commonly used as a free corner escape instead because the move was fully invincible when Makoto hopped to the wall. So, for Ultra Street Fighter IV, the move's invincibility properties were changed so the move was only projectile invincible. Strikes are able to interrupt the hop back, preventing Makoto players from using it to evade everything. 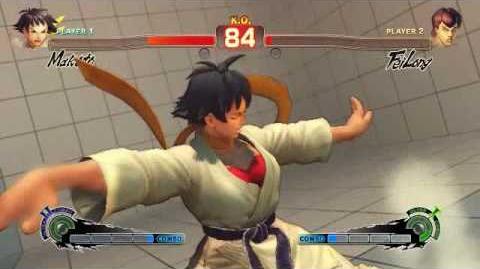