Guile's stage, set on the Air Force Base, has some of his colleagues watching the battle and an F-16 Fighting Falcon jet on the background with the text CAP RF512. The stage has two crates that can be broken.

Guile went to the air force base while searching who killed his comrade Charlie Nash, his only clue being the name M. Bison. In the base, someone challenges him for a fight in exchange for information.[1]

In the original Street Fighter EX, the air force base serves as the stage of both Guile and Allen Snider. The EX Plus version differs slightly in the coloration. The background music is called Strange Sunset.

The Air Force Base appears as Guile's stage, being a somewhat of a replica of the Super Street Fighter II version, now featuring an F-18. The crates were previously not breakable in this version of the stage, however.

In Street Fighter II V, Ken challenges Guile in an air force base.

Guile's theme plays on the Air Force Base stage. 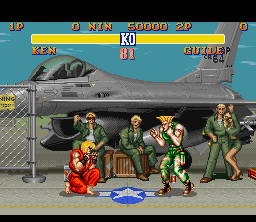 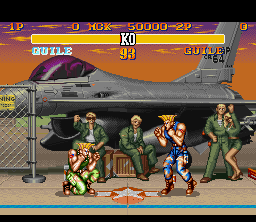 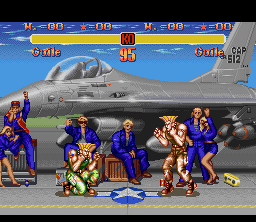 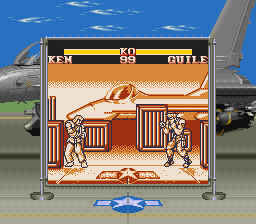