"In a town deep in the Amazon rainforest, there is a popular rumor about street fighters appearing every day to get in a fight. But for the jungle king, Blanka, these fighters are nothing but kittens in front of him. There are no longer dangerous enemies for him to face in the Amazon jungle. He roars, his blood calling for strong enemies. He is determined to travel the world to pursuit new challenges."
—Instruction manual

The stage is set on a wooden plank. There is a large bass fish hanging on the right side of the stage. Next to it are tourists who are watching the fight. One of them is using a Polaroid camera to take pictures. On the left side of the stage is a cabin containing natives who are also watching the fight. The cabin is made of plywood and it has a roof that is made entirely of straw. Each group is separated by a large tree which is set in the very middle of the stage. The tree consists of vegetation and a snake is curled around it. In the background is a still lake. Above it is a blue sky and white clouds. 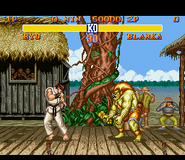 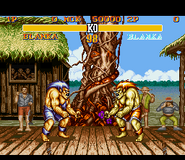 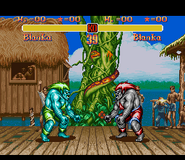 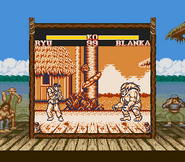 In the arcade World Warrior.

In The New Challengers

In Super Turbo
Add a photo to this gallery

Retrieved from "https://streetfighter.fandom.com/wiki/Amazon_River_Basin?oldid=192916"
Community content is available under CC-BY-SA unless otherwise noted.