The Andore Family (An-do-rey) are a group of pro-wrestling thugs (visually modeled after real-life wrestler André the Giant) in the Final Fight series. They can be told apart by clothing color in the original game:

The Andore family were members of the original Mad Gear Gang that terrorized Metro City. Cody, Guy, and Haggar frequently ran afoul of Andore and Andore Jr. during their search for Jessica. One of the heroes was ambushed by Andore.Jr in the West Side Area and shanghaied into a brutal cage match involving Father Andore, Uncle Andore, and Grandfather Andore; who were senior members of the clan. The Andore elders were defeated, however, and the rest of the Mad Gear Gang were scattered when Cody defenestrated Belger, killing him.

When the Mad Gear Gang regrouped under a new leader and went international, at least three of the Andores (Andore, Andore Jr., and Grandfather Andore) were still with the gang. However, Haggar and his new allies Maki and Carlos once again dealt the gang a crippling blow, this time disbanding them for good.

Andore was next seen amongst the ranks of the Skull Cross Gang. Haggar and his allies eventually disband this gang, prompting the Andore clan to go straight. Andore decides to become an honest wrestler under his given name, Hugo, managed by former gang-mate Poison.

Hugo became a successful street fighter and participated in the fourth and third World Warrior tournament by chronological order.

Three of the Andores can be seen in the background of the Ring of Justice stage from Street Fighter V: Arcade Edition, notably U.Andore, G.Andore and Andore. Jr.

U. Andore in Final Fight. 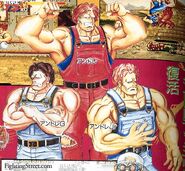 The Andore Family in Final Fight 2 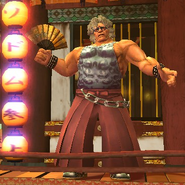 An Andore in the Mad Gear Hideout stage. 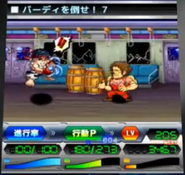 An Andore in Street Fighter × All Capcom.

Add a photo to this gallery
Retrieved from "https://streetfighter.fandom.com/wiki/Andore_Family?oldid=230561"
Community content is available under CC-BY-SA unless otherwise noted.