Area (エリア, Eria?) is a video game character from the Street Fighter series, first appearing in Street Fighter EX2 Plus. She is a genius teenager, daughter of a scientific inventor, whose inventions she has modified into weapons for her own use.

Her default costume is a sports outfit, consisting of a purple, black and blue short sleeve shirt with a small dark blue heart design on front, with her imprinted name at the back of the shirt, black cycling shorts with a blue trim, and purple and blue boots that resembles roller blades. She also wears black gloves. In her Shadaloo C.R I. profile artwork, she remains largely the same. The blue trims on her sports outfit is lighterm, the blue outlines of her cycling shorts gains a purple square designs in each sides and her small heart design on front of her shirt is white.

In Fighting EX Layer, her hair has a full fringe and her two braids are now adorned with four blue and cyan ribbons in each sides. She also wears eyeglasses with pink squared-lens (in her CGI appearance, they appear to be red). Her outfit has a different shade of purple. Black and pink short sleeved sports suit with metal designs and purple bulkier gloves. Her bionic arm Cancer is modified with digital properties and is bulkier in appearance.

Area is curious, enthusiastic, eccentric, clueless and "a little crazy". It is said that Area has an intellect far superior to that of her father and has far surpassed his inventive abilities. However, she is arrogant to fighters who don't use technology, considering them inferior, and her ending in Street Fighter EX3 questions her sanity. She loves robots.

In Fighting EX Layer, her win animations shows her love of her own inventions, like when she hugs her bionic arm. Area's inventions are able to socialize with her and imitating her childish tendencies whenever she taunts on a opponent.

Area is the daughter of a very wealthy and creative inventor, and is in fact testing two of his latest inventions: rocket skates and a giant mechanical arm, codenamed Cancer (キャンサー, Kyansā?). She enters fighting tournaments in order to obtain data on various different martial artist's fighting styles, as well as to attract attention to her father's inventions. Dismayed by his daughter's penchant for martial arts combat, her father figures if he cannot dissuade her from entering tournaments, the least he can do is equip her with the latest in technological design to give her an edge.

As a fighter, Area doesn't detest the enhancements, and in fact embraces them, considering those who fight without technology to be primitive brutes. Not content to simply accept the inventions her father makes for her, she constantly tweaks and improves upon them between fights to her liking. She arrives into battle with mechanized roller blades and a mini-rocket launcher on her arm.

Most fighters who are pitted against her don't know which is more bizarre: her equipment, or her lust for battle at such a young age. Area is quick to prove that her technology is not something to be taken lightly, but she lacks the raw strength and talent that many more experienced fighters possess. While she could use her equipment as a blunt clubbing weapon, she is careful not to damage the delicate components that they are made out of. She finds herself easily overwhelmed by opponents who are not impressed with all of her gadgets.

"I'm home!" The girl was greeted by a ringing telephone while entering the store. Area picks up the nearby telephone receiver.
"The complete set of 'Cancer'? We got it! Thank you for your purchase!"

Area was still under the wrong impression that all the fighters were actually a group of battle robots. Happy with her victory she says, "Gotcha! Let me see... the main materials of these robots are water, protein and... Hey?! Doesn't that match up with that of a human? I can't believe this!!" However Area is too excited to grasp her misunderstanding of the situation and instead goes further into denial over what she has done...

Area was announced as one of the DLC characters along with Sharon, Pullum Purna and Vulcano Rosso. She was first seen during the EVO 2018 trailer.

She is currently planned for a June or July 2019 release.[2]

After defeating Pullum Purna in battle, Area reacts towards most people about her senses in 10 years ahead within the rest of the world as well as she planned to promote some futuristic but fashionable sporty attires with her inventions. Area also states that she was only kidding about her promotion of her outfits.

In Fighting EX Layer, she retains all of her moves in the Street Fighter EX series, her Humming Rush is now slower to execute due to her bionic Cancer became bulkier and can also be blocked by the opponent due to its slow movement until it launches back into her upward and also happens when she combos her opponent between this move and Cancer Shell. Her Great Cancer Super Combo now dealing critical damage when she combos her opponent even using her Air Great Cancer in mid-air. Her Five Star Raid now have large golden star effects during execution. 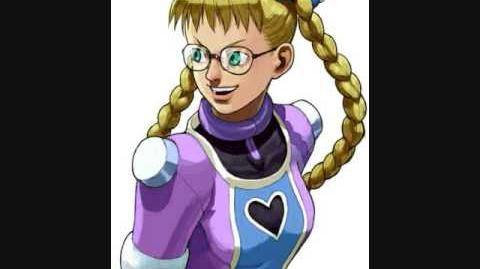