Australia is a constitutional monarchy in Oceania. It is featured in Street Fighter Alpha 2 and Street Fighter V. Canberra is its capital and Sydney is the largest city.

List of fighters who hail from Australia[edit | edit source] 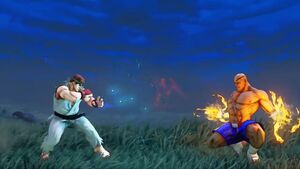 Field of Fate stage in Street Fighter V
Add a photo to this gallery
Retrieved from "https://streetfighter.fandom.com/wiki/Australia?oldid=237740"
Community content is available under CC-BY-SA unless otherwise noted.