Jon Bailey (Street Fighter V)
Axl (アクセル, Akuseru?) is a character from Final Fight, appearing as a member of the Mad Gear Gang. He, along with his palette swap Slash, appears as a common enemy in the original Final Fight.

Axl is a tall, muscular man, with long blond hair and an open leather jacket, exposing his chest. He wears a red embroidered bandanna around his forehead, along with brown fingerless gloves, resembling a muscular version of his namesake, Axl Rose.

In his Street Fighter V artwork, he now wears white cowboy boots with black stars embroidered on the sides.

Axl has a bit of a wild personality, often enjoying tearing through the streets of Metro City with his friends at night. He has a love for motorcycles and vehicles, his newest prize being a made-in-Japan Tekko Twin Ryo (テッコツインリョー, Tekko Twin Ryo?) motorbike. He also has a fondness for a Japanese soft drink rich in calcium and iron.

Axl first appears in Final Fight, acting as a member of the Mad Gear Gang under Belger, fighting against Haggar, Cody, and Guy who are attempting to rescue Haggar's daughter, Jessica.

After Belger's defeat and the collapse of the Mad Gear Gang, Axl is said to be active in the Metro City Bay Area along with fellow ex-members J, Abigail, and Roxy.

Axl, alongside Roxy and J, appear in Abigail's character story, reminding him that he let the trio borrow his car (which Abigail thought was missing) and mocks him for forgetting his promise. Furious, Abigail throws them all into the car and walks away.

Axl, along with Slash, is a straightforward fighter who delivers two main heavy damaging attacks, his strongest attack being the powerful Double Hammer Punch (ダブルハンマーパンチ, Dabaru Hanmā Panchi?) and his second attack is a devastating roundhouse kick. What sets him apart from the other members of the Mad Gear Gang is his ability to block, something no other enemy in Final Fight can do aside from himself and Slash. 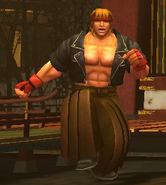 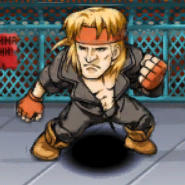