Ayutthaya Ruins (アユタヤ遺跡, Ayutaya Iseki?) is a location in Thailand that appeared as Sagat's stage.

The area contains a giant reclining Buddha statue surrounded by other temples and ancient structures. The statue itself is a stylized and restored version of the original Wat Lokayasutharam reclining Buddha in the Ayutthaya Historical Park in Thailand.

During his hard training to prepare for the next time he faces Ryu or Ken, Sagat used the ancient Ayutthaya Ruins for zazen and spiritual training. Hearing about Sagat's strength, a fighter appeared to challenge him, and Sagat saw it as an opportunity to test his abilities.[1]

In World Warrior, the statue appears white with a palm tree decorating the area. Champion Edition recolored the statue into a bronze tone and the palm tree in the foreground is missing. In Super Street Fighter, the statue remains with the bronze color but the background setting reveals a more detailed landscape of the Ayutthaya ruins over a red sunset.

Ayutthaya Ruins returns as Sagat's stage.[2] This time, the statue looks larger than its predecesor and contains some pillars scattered in the area.

The stage is renamed the King's Court, and retains most of the details from the original World Warrior version, including the missing palm tree. 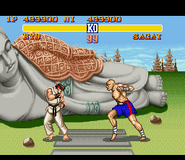 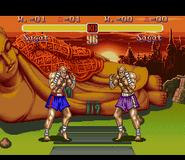 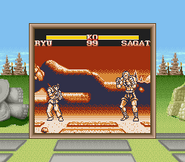 Ayutthaya Ruins in The World Warrior

Ayutthaya Ruins in The New Challengers

Ayutthaya Ruins in Super Turbo
Add a photo to this gallery

Retrieved from "https://streetfighter.fandom.com/wiki/Ayutthaya_Ruins?oldid=223256"
Community content is available under CC-BY-SA unless otherwise noted.