Battle Harbor (バトルハーバー, Battle Harbor?) is an harbor located in the United States of America. It serves as Ken's home stage.

In Street Fighter II, Ken's stage is in Battle Harbor, a port near a sleepy small town of a city county. According to local stories, Battle Harbor is said to have gotten its name back in the town's founding days when two men began to have a fist fight of such proportions that it drew many of the citizens and even travelers down to the docks to see them duel. Since then, the place is known for having street fights nearly every day, and is celebrated as a town tradition.[1] Due to Battle Harbor's historic reputation, the port has seen even international guests and fighters from around the world clash on its grounds.

Because of its fighting tradition, there is a town organized event for civil local fights. These events come in two varieties: Beginner and Expert. The Beginner's event is held every Saturday, and is for the everyday citizen to participate to get a taste of street fighting for themselves. Floor mats and padding is placed around for safety of the participants, and are canceled in the event of adverse or rainy weather. The Expert's event is held everyday and without delays, and are open to anyone, although it is recommended for seasoned fighters. Arenas for the Expert events also have options for obstacles, specifically wooden crates and oil drums.

Into the current day, Battle Harbor is considered a place for the people of the town to unwind and spectate fights, be it from the young and old, the everyday man to the martial artist, and even to people of many different backgrounds. It's said that due to some newcomers into fighting gaining the taste of fighting through Beginner's, plenty of them are sent to the nearby hospital, but is accepted as a fact of life. It is also a popular party area, including crowds on party boats and cruisers witnessing the nearby fights. In the wake of the Second World Warrior Tournament, Battle Harbor becomes a hotspot for upcoming challengers. With the arrival of Ken however, he soon finds the docks as a perfect place to warm up to the rough path ahead, and gains a fierce reputation here after defeating many fighters nonstop.[2] 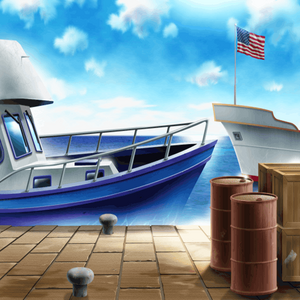 As it appears in Namco × Capcom. 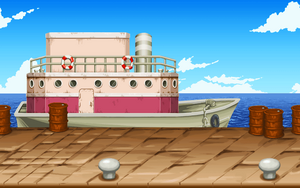 As it appears in Street Fighter × All Capcom.