The son of a Russian senior bureaucrat, Biff has received special education in wrestling since he was a child. He practices an assortment of martial arts (sambo, karate, etc.) and has won many championships. Disliking showmanship, Biff prefers executing his attacks with concentrated power and playing out every move in his head. At one time, he was a student at Mike Haggar's gym, along with his friend/rival and fellow wrestler Gunloc. It upsets him greatly that some individuals consider wrestling to be fake.

Biff's quote when losing alludes to the possibility that he was once a training partner and/or is friends with Zangief: ("Comrade Zangief was right! You all play cheap!").

The Hyper Cannons, Biff and Gunloc's tag team, was mentioned in Hugo's ending in Street Fighter III: 2nd Impact if either Ryu, Necro, or Gill is fought as the final boss.

Biff has yet to make an appearance in the mainline Street Fighter games, but a character relations chart in Street Fighter V: A Visionary Book lists him as part of the CWA alongside Gunloc.[3] 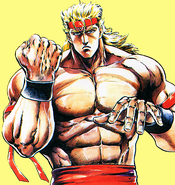 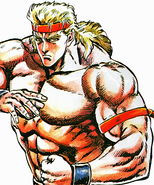 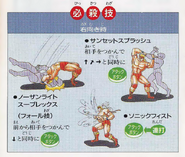 Official artwork showcasing a tag team match consisting of the "Hyper Cannons" (Biff Slamkovich and Gunloc) vs. the "Silent Assassins" (The Scorpion and Jumbo Flapjack).