In EX2 Plus, Bison II appears in a white uniform and has an unlimited amount of SC energy. He gains two variations of his Psycho Cannon Super Combo and is able to charge them to twice their normal size. In EX3, his appearance was changed as he now has orange tinted skin and wears a black uniform with golden shoulder and knee pads.

A new world was born. One that shall be filled with fear, despair, and cruelty.

As the real Grand Master looks upon the defeated M. Bison, he taunts, "What a fool you are. It's not I who am the true marionette, but you. Your power will dwell in me forever... And you will reborn as my blood and flesh!" With his cape flying, he gives the first command to his henchmen, "The party is over. The new world order begins NOW!!"

In Street Fighter EX2 Plus, if certain conditions are met, after defeating M. Bison, a second M. Bison surrounded by floating embers descends from above, merges with the defeated M. Bison and then fights the player. The stage, which is a temple or ruins of some sort, changes to a black screen where streaks of energy rise from the ground (which is the same background used for Meteor Combos) as the battle takes place.

In EX3, the requirements for reaching him have been made easier along with the difficulty of facing him in battle as he no longer has infinite SC energy although he will still have a full meter right off the bat, he retains the variations of the Psycho Cannon but can only charge them to regular size.

Bison II also tends to be far more aggressive than his normal counterpart in all the titles he appears in, and makes frequent use of his teleporting ability.

Though he cannot be selected in EX2 Plus, he becomes playable in EX3, though he can only be used in Original Mode and is not available in other modes. 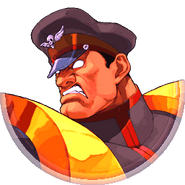