These troopers were solely created for the game and they (with Blade technically being the sole exception) have not appeared in any other Street Fighter game or medium since their debut until they were given profiles and new artwork on the official Street Fighter V website. In their profiles, they are the Shadaloo Troopers (シャドルー・トルーパーズ, Shadaloo Troopers?), skilled combatants that are part of Shadaloo's North American branch.[1]

In addition to Blade being apart of the default roster of the arcade version of Street Fighter: The Movie, Arkane, Khyber and F7 were also hidden characters and the remaining Bison Troopers to be experimented and turned into cyborgs. Each of whom had their own specific attributes and differing abilities.

Although the particular uniform from the movie was never used in the animated series, M. Bison and his cohorts have many soldiers at their disposal throughout the series. Their appearances vary from episode to episode, ranging from typical street thugs to commandos with high-tech powered armor and futuristic-looking vehicles. Regardless, they all have advanced laser weapons at their disposal (due to the show's censorship policy on using firearms).

Standoff with the A.N.
Add a photo to this gallery 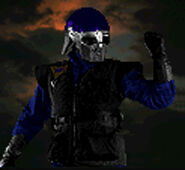 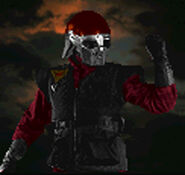 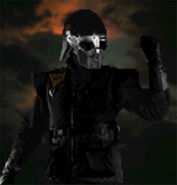 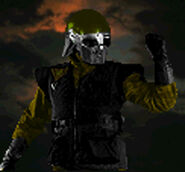 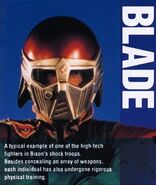 Alan Noon as Blade.
Add a photo to this gallery

F7's SFV Design
Add a photo to this gallery

Retrieved from "https://streetfighter.fandom.com/wiki/Bison_Troopers?oldid=175414"
Community content is available under CC-BY-SA unless otherwise noted.