The seven PSA (Psychopower Stratospheric Aircraft), nicknamed as the Black Moons, are a group of doomsday weapons controlled by Shadaloo and are the main plot point in the story of Street Fighter V. They are also part of the Illuminati's prophecy, mentioned in Gill's ending in Street Fighter III: 2nd Impact.

The Black Moons are part of Operation C.H.A.I.N.S., which was planned by Shadaloo to cause chaos in order to increase M. Bison's Psycho Power. Each Black Moon requires a control key shaped like a small piece of chess to be activated in a control device in the Shadaloo Headquarters, which will cause them to detonate and release a powerful electromagnetic pulse, disabling electronics in a wide area. They were set above United States of America, Brazil, Japan, China, India, Russia, and United Kingdom.

To avoid their plans, the programmer forced to create the Black Moons sent the seven pieces to different people, hoping that they will manage to stop Shadaloo. Her friend Rashid received the sun-shaped piece, Alex the crown piece, Chun-Li the star piece named Merope (昴宿五, Merope?), Guile the moon, Karin the sword, Zangief the horse, and Laura the jar. F.A.N.G managed to take Rashid's piece and detonated the Black Moon set over New York. After learning that the pieces can also be used to deactivate them, the other Black Moons are stopped. F.A.N.G is angry with this, but he reveals a backup plan to cause the Black Moons to crash into Earth, causing more damage. Li-Fen tells Rashid that his friend planned a way to stop it, a complete halt-of-operations command activated by a code only he can decipher. He manages to stop their fall, identifying the code easily as his own nickname, "Rashid of the Turbulent Wind". 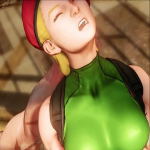