Vega leaps onto a wall, then performs multiple Sky High Claws on his opponent in quick succession, rising higher up the screen every time while shouting the Ultra Combo's name, scattering broken petals of roses at the peak of the move and laughing sadistically as the opponent falls, while he lands harmlessly on his feet. The first Sky High Claw must land for the attack to work.

As of Super Street Fighter IV, Vega can connect with the upward jump to the corner, as with his EX Flying Barcelona Attack.

In Street Fighter X Tekken, he can control which wall he first dives off of by ending the motion towards the corner of choice in the diagonally up direction.

Vega flies diagonally downwards from whichever corner he hopped off of — meaning the combo will not land if his opponent is near the wall from which he jumps. He also needs to hit the wall before he is safe from counter-attacks.

Bloody High Claw goes through projectiles, and is thus effective against projectile spam. The ideal position for projectile punishing is to be with 3/4 of a screen's distance to the desired wall; with quick reaction time, the opponent can even be caught mid-fire.

Bloody High Claw comes out very quickly, so a player should know almost instantly if the opponent blocked it or not. Even if blocked, Vega lands at a distance away from them, making it hard to punish. Also, it does quite a bit of chip damage, and the claw is not needed to execute it.

From Super Street Fighter IV on, landing the first hit nearly guarantees the rest of the move hitting, and adds more damage to the Bloody High Claw's maximum damage output. The added hit can catch an opponent mid-backdash, as well as punish pokes and slow-recovery moves. As of the Ver. 2012 patch, players can also, with strict timing, combo into the Bloody High Claw with Cosmic Heel.

At high levels of play, the best chance a player has to land this is by performing a Level 2 or 3 Focus Attack first. It is also possible to nearly guarantee a successful attack by starting the combo with an EX Flying Barcelona Attack towards the opponent: if it connects with a non-blocking or air-borne opponent, it will damage and stun them, leaving them unable to block the attack.

However, the height of the opponent should be kept in mind upon launching the attack; if they are fairly high up on the screen, it will pop them up too high for the attack to hit. The best chance for success is to hit an unsuspecting standing opponent or an opponent either halfway-through or near the end of a jump attack. 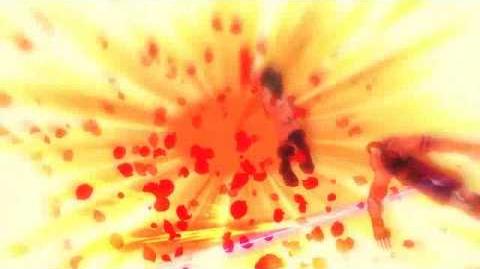 Bloody High Claw SFXT
Add a photo to this gallery
Retrieved from "https://streetfighter.fandom.com/wiki/Bloody_High_Claw?oldid=217798"
Community content is available under CC-BY-SA unless otherwise noted.