Bloody Hokuto (血の封印を解かれたほくと, Chi no Fūin o Tokareta Hokuto?, "Hokuto with Seal of Blood Broken") is a video game character from the Street Fighter EX series, first appearing in Street Fighter EX Plus. This is the form Hokuto takes if the Seal of Blood (血の封印, Chi no Fūin?) implanted within her is unleashed. During this form, she takes on the personality of her assassin persona Shirase (訃, しらせ, Shirase?).

Her outfit is that of a kyudo practitioner's uniform, being a pair of black hakama and white tabi, with a black lacquered muneate breastplate tied with white laces, over a dark gray hakamashita like gi. On the left hand she wears a brown leather glove which covers entirely thumb, index, and middle fingers but leaves completely uncovered ring and pinky fingers up to the major knuckles. This glove is secured to the wrist with a dark brown strap. She wears her forelocks up with a balck headband, that prominently displays her forehead. On her forehead, immediately below this headband, can be glimpsed a red emblem with a "vi" letter shape resembling a scar. Her long raven hair is let down. Her skin is very pale.

In Street Fighter EX3, she retains her normal appearance, and her hands are covered in blue flames, similar to when Kairi has a full Super Combo Gauge.

In Street Fighter V, Her gi is purple and she no longer has a muneate breastplate. She maintains her black hakama and a white tabi from her original outfit. Her forehead shows a "V" letter, which burns the middle front of her white headband for few seconds.

In Fighting EX Layer, Bloody Hokuto assumes her assassin persona as Shirase. Her hair is black and white similar to Vulcano Rosso's and is tied in a traditional high ponytail adorned with white laced ribbon. Her outfit is different than her previous kyudo practitioners attire. Like Evil Ryu in Super Street Fighter IV: Arcade Edition, Bloody Hokuto wears an elaborate black and white sleeveless side-tie dress with a white cloth to cover her shoulders, her mundane breastplate is red being connected to her brown corset-like long skirt in each sides to tuck on her side-tie dress and has a white and black backward laced ribbon design tucked into her corset and a large white and black laced ribbon tied at the back. She wears a different colored v-neck tabi (white on the right and black on the left) and a traditional red and gold Japanese geta. She also wears different colored long fingerless gloves with white on the right adorned with a black laced ribbon and the other is black with black gauntlet-like wristband with a gold trim. She also retains the "V" mark on her forehead.

Unknown to Hokuto, her true father implanted a mental suggestion to locate Kairi and carry out his elimination. To prevent this, Hokuto was implanted with the Seal of Blood (血の封印, Chi no Fūin?) by the elders of the Mizugami clan, which would be unleashed whenever Hokuto would come into contact with Kairi. Bloody Hokuto can be distinguished from her regular counterpart by the red mark on her forehead.

(Japanese version) "Like I have expected... the Seal of Blood is broken" Lamenting that she has become an ordinary assassin, Hokuto's adoptived father looked up to the sky and  apologized to his friend. "Brother and sister have both been swallowed. There's nothing that can be done to change their bloodstained path... But still... that would be my last wish..."

"Like I thought so...the dead must be informed." Lamenting that Hokuto has returned to her devilish ways, her adoptived father looks up to his friend in the sky. "The brother and sister have both been swallowed... Now I understand the path of carnage the master spoke of. However, the founder's bloodline still has one last bet ... Nanase, only you can save those two now." Only the 17-year-old daughter remained to enter the fight.

[[File:Unnamed.jpg|thumb|210px|Bloody Hokuto in Fighting EX Layer Bloody Hokuto, now under her real name Shirase, appears as one of the playable characters in Fighting EX Layer, the spiritual sequel to the Street Fighter EX games. Now freed from the Mizugami clan's seal, her final act as "Hokuto" was to seal off her younger sister Nanase's memories of the Mizugami and their conflict so that she could live as an ordinary girl.

Much like Evil Ryu, Bloody Hokuto fights similarly to her normal counterpart, except that she gains a number of new moves. Her style is less defensive and more aggressive, being able to use a ki-infused palm strike (Shorin-Geki) that knocks the opponent away. She also has the Renbu, a strong multi-hit combo that ends with her impaling her opponent, this move being originally from Kairi.

Bloody Hokuto is absent in Street Fighter EX2, with Hokuto having some of her moves in her normal form. She returned for Street Fighter EX3, acting as a Super Combo transformation for regular Hokuto. She has the same moves she had in the first EX game, in addition to a new Meteor Combo.

In Fighting EX Layer, she retains all of her normal form's moves from the Street Fighter EX series as the variety of weapons during her Super Combos are red indicating her bloody persona. Her Kiren'Eki Super Combo enables her to charge her arrow from her bow for a limited period to deal critical damage on her opponent.

Bloody Hokuto as she appears in Street Fighter EX Plus

Bloody Hokuto in her ending, in Street Fighter EX Plus α
Add a photo to this gallery 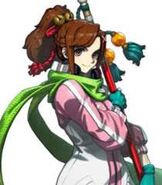 Shirase in her game portrait

a close-up of Shirase
Add a photo to this gallery

Shirase artwork by Falcoon.
Add a photo to this gallery

Retrieved from "https://streetfighter.fandom.com/wiki/Bloody_Hokuto?oldid=169200"
Community content is available under CC-BY-SA unless otherwise noted.