Street Fighter Wiki
Register
Don't have an account?
Sign In
Advertisement
in: Articles requiring cleanup, Articles in need of images, Characters,
and 7 more

Boman is a young black American who has short blond hair in a mohawk hairstyle and a pair of brown eyes. His mohawk hairstyle would later be adapted by Birdie in his appearance from within Street Fighter V.

His primary outfit in both Rival Schools: United by Fate and Project Justice is his Pacific High uniform, a blue formal suit jacket with a Pacific High logo on the left side with a white long sleeve button shirt with a red tie on the collar, white school pants and yellow sneakers with orange linings.

In Project Justice, he has an alternate outfit where he fights shirtless in order to show and display his muscular structure.

In the School Life Mode of Nekketsu Seisyun Nikki 2, Boman is usually seen in his primary outfit, but he also wears different outfits from within the duration of the school term. During both Physical Education Day and National Sports Day, Boman wears a gym outfit, a dark blue tank top, matching dark blue shorts and his sneakers from his primary outfit. During the Night Festival, Boman wears his casual outfit; a white short sleeve loose button shirt with a Pacific logo on the left side, white pants and brown shoes. At the School Fair, Boman wears a pink long sleeve button shirt with a black bow on the collar as the sleeves were folded into cuffs, black pants and matching shoes; he also wears a white apron within his outfit. During both Christmas Day and New Years Day, Boman wears a priest attire which is worn by priests during Sunday church masses, a black long sleeved priest coat with a golden cross, matching pants and shoes.

Despite the fact that he is still a student, Boman acts far ahead of his age. He is a devout Christian who never misses Sunday Masses. As a person who dislikes violence, he is aware of his own size and strength. After any unavoidable fight, he silently prays to God for forgiveness. Like Roy and Tiffany, Boman also hails from the United States and is a Pacific High student. With a non-violent nature, he is training to be a preacher.

In the School Life Mode of Nekketsu Seisyun Nikki 2, Boman can be seen cheering the player during both Physical Education Day and National Sports Day and is also a very friendly person when he takes a liking to the edit characters.

Boman joins Roy and Tiffany in their investigation of the school kidnappings, albeit reluctantly due to his non-violent nature. Alongside with his fellow Pacific High classmates, Boman is captured and brainwashed by Justice High into becoming a mindless servant for them, but the three of them are eventually freed by Batsu and his friends. In Boman's ending, he decides to stay in Japan in order to better understand Japanese culture and to also help bridge the difference between Japan and the United States, with Roy and Tiffany personally supporting him before leaving and heading back to the United States. Later on, he was seen with Batsu, Hinata, Natsu, and Gan making and holding a fund-raising campaign.

Boman is the central character of the Pacific High story, having set out to find the perpetrators who were responsible for disrupting an inter-school athletic competition. He is joined in the investigation by two Taiyo High students, Ran and Chairperson, and later on, his fellow Pacific High classmates Roy and Tiffany, in which the two of them unexpectedly return to Japan in order to reunite with and help aid Boman out from within the investigation.

After the incident, Boman and Roy began to have a fistfight much to Tiffany's dismay, but as it turns out, it was nothing more than an intense fist bump. Roy then tells Boman that he and Tiffany are returning and heading back to the United States while also telling him to take care of things in Pacific High as well. Thereafter, Boman is last seen with Ran and Chairperson waving goodbye outside the airport when the plane that Roy and Tiffany rides just passed through.

Some of Boman's moves introduce Christian imagery, mostly crosses when utilizing his boxing fighting style. This is due to the fact that he is training to be a preacher. His throws and his team-up assist are based on wrestling. 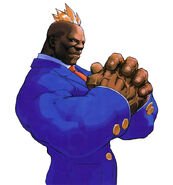