Bonus Stages (ボーナス ステージ, Boonasu Suteeji) are common throughout the Street Fighter and Final Fight series, usually after a set amount of fights or rounds in the single-player mode. Though they are not optional, these stages are solely purposed for gaining additional points to achieve a high score, as the player cannot lose the game in those stages.

Making their first appearance in the original Street Fighter with Ryu or Ken breaking tiles, bonus stages have gone on to be a regular feature in most games in the series.

In the original Street Fighter, there were four different bonus stages throughout the single-player mode:

In the Street Fighter II series, bonus stages consisted of beating up various inanimate objects. The order and number of stages vary per re-release:

Both players get the same score as they win the Oil Drum Bonus Stage from Super Street Fighter II: The New Challengers 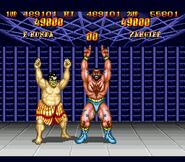 Both players get the same score as they win the Wall-of-Bricks bonus stage from Street Fighter II': Special Champion Edition

The bonus stages of the Street Fighter III series are comprised of a familiar scenario and an all-new bonus stage to showcase the "Parry" system:

Bonus Stages were absent from Street Fighter IV but make their return in its two updates, Super Street Fighter IV and Ultra Street Fighter IV. These stages are modeled after the car and barrel stages from Super Street Fighter II; however, the Car Crusher stage (now with a 60-second time limit) is more reminiscent of the first bonus stage present in the original Final Fight, where the car is placed in an abandoned gas station in the same area of the "North America: Drive-in At Night" stage. If a "Perfect" score is achieved in the Car Crusher stage with Guy, Cody, Poison, Hugo or Rolento (all from the Final Fight series), Bred will stagger on-screen at the end, fall to his knees and cry "Oh, my car!" in despair, much like it happened in the original game. As for the Barrel Buster stage, it takes place at the same Scottish brewery of the "Europe: Historic Distillery" stage, with a worker handling the influx of barrels.

A bonus stage appears in Street Fighter V: Arcade Edition. The player is tasked with breaking twenty barrels as they plummet into the center of the screen from conveyor belts above. As the barrels drop onto the stage and roll toward either side, the player has a limited amount of time to break the barrel before it rolls out of the screen. The brown barrels can be broken in one Heavy attack. The blue barrels are particularly tough and heavy, meaning that it requires several attacks to break them. The red barrels explode upon being broken, destroying any barrel within range, including the blue barrels. The player also has help from a computer-controlled character who will keep the barrels in the center using his/her own move set. If a barrel hits either character, it puts them in a standing reset and causes the barrel to roll in the opposite direction. Two P appears as a CPU opponent. At the end of the bonus stage, the player receives 500 points for every barrel destroyed. If all twenty barrels are broken, the player receives an addition 10000 points for a perfect finish.

Failing to break all the barrels.

The game has two identical Bonus Stages in the end of Rounds 2 and 4, where twenty oil drums will appear rolling, some of them bouncing. In the second Bonus Stage some drums will also fall from the top of the screen. The player is rewarded depending of how many drums are destroyed:

While Bonus Stages aren't present, the game includes mini-games such as:

A barrel bonus stage based on the one from Street Fighter II was added by Arika due to the request from Capcom. It is unlockable in the PlayStation version. It is largely the same as the barrel bonus stage in the Street Fighter II games, except that the barrels come from four directions (from the left, right, up-left and up-right corners) and vary in color, speed and number of hits needed to break them. Breaking them in succession grants more points, and using a Guard Break on a barrel will cause it to spin in place, giving the player more time to hit it. The player must break as many barrels as possible in a limited amount of time, and special bonuses are granted if no barrels are missed or if the player doesn't get hit. 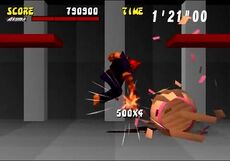 This game features two Bonus Stages. The first one is Excel Break. In it, the player is given three Super Combo bars and has to knock down a dummy Cycloid. The dummy's health bar can only be depleted during an Excel Combo. If the player runs out of either time or SC Gauge power before Cycloid has been defeated, the bonus round is lost. If successful, the player will be granted free Excel for the next round (no bar cost).

The second bonus is Satellite Fall. The player has to destroy the falling "ARK-99" satellite as it floats above the Earth's surface, while also watching out for occasional falling meteorites. The player can get more points if the various parts of the satellite are broken off before destroying it, and also from destroying the meteorites. If not destroyed before the time runs out, then the satellite destroys the Earth and the player loses the bonus round. If the satellite is destroyed, the player is granted unlimited SC Gauge for 20 seconds during the next round (against Garuda), and after said timer expires, the player gets to keep a full charged SC Gauge to spend it normally.

The barrel bonus stage returns in the PlayStation version, being very similar in function to the previous game. When Excel is active, the barrels won't break as soon as they are hit, and will instead break when the Excel period ends. This allows the player to repeatedly hit the barrels while at the same time making them easier to break when there are many on-screen.

Along with the bonus stages, there is also an option to directly fight Bison II. 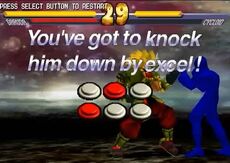 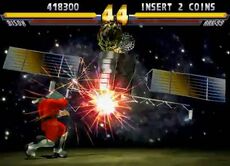 This "bonus stage" is only used during the end credits, where players can endure an endless wave of enemies in a 3D beat 'em up styled brawl. The player has unlimited meter and has to defeat as many opponents as possible. The enemies can fight back and even use special moves, but they are defeated in a few hits. 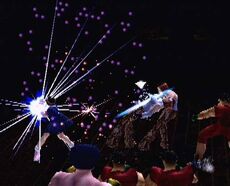 As of the car bonus stage in Street Fighter II, with E. Honda, he can softlock the game by damaging a corner of the car and leap backward facing the opposite direction (eg. if going on left side, Honda faces left, Honda jumps right, etc.). If this is done at the perfect angle, Honda will pump the car infinitely and also crash the game. When time runs out. the car is still bouncing, Honda is still flying, and the game has to be reset.

This softlock also can be done with Ken in Champion Edition. After damaging a corner of the car (usually the left corner), the player should move all the way to the left, then jump towards the car and perform a Shoryuken with LP over the damaged part of the car, if done correctly, the motion of Ken's Dragon Punch will remain frozen, hitting multiple times the blocked area, pumping the car infinitely.