"Full throttle! Are you some sort of masochist? (フル・スロットル！ 地球とのハグは楽しい？, Furu surottoru! Chikyuu to no hagu wa tanoshii??)"
—C. Viper

Executed by performing two quarter-circle backward motions and pressing all three kick buttons while airborne, Viper flame-kicks her opponent in the neck, driving them into the ground and grinding the now-burning opponent's face along the ground like a surfboard. She then performs a flaming backflip which knocks her opponent into the air and catches them with her forearms as they land. She then jumps into the air with her opponent's face in between her arms, and as she reaches the apex of the jump her gloves electrify the opponent. She lands on her feet harmlessly and her charred opponent falls on their back.

This attack has a total of 29 hits.

Burning Dance can be used after a EX Seismic Hammer, EX Thunder Knuckle, High Jump or a Focus Attack.

Burning Dance does not do much damage, and has to be calculated for use in some combos.

Full Sequence.
Add a photo to this gallery 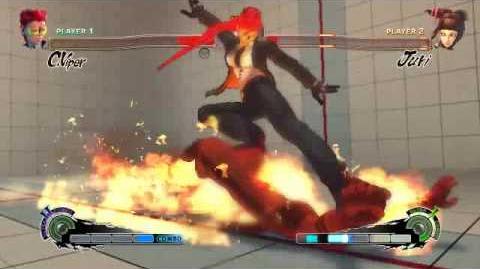 Retrieved from "https://streetfighter.fandom.com/wiki/Burning_Dance?oldid=226478"
Community content is available under CC-BY-SA unless otherwise noted.