Executed by performing Light Punch, Medium Punch, Heavy Punch and Heavy Kick or down with Heavy Kick, the user will do its combination with the following attacks of button pressed. This attack has 4 hits and two follow-up attacks:

Executed by pressing the heavy kick button after the third punch of the sequence, Guy will make a close heavy kick that will send the opponent in the air.

Zeku utilizes a slight variant on the chain, being able to use only partial versions depending on if he chooses damage over okizeme or safeness.

Bushin Gokusanken - Ni is executed by Light Punch and then Medium Punch, Zeku delivers a quick back fist to the opponent. When the attack connects, Zeku follows up with a punch to his opponent's midsection. This target combo has the lowest amount of hits, which also means it inflicts the least amount of damage and stun. While it is technically the safest on block, Zeku can still be punished.

Bushin Gokusanken - San is executed by pressing Heavy Punch after Bushin Gokusanken - Ni. Zeku, this time, ends the combo with an upward, open-handed chop. While this shares similarities to his Bushin Soukosou target combo, the primary difference is that it results in a knockdown. This deals more damage than the aforementioned target combos. While it inflicts less damage than the ensuing combo, Zeku has a better advantage on knockdown due to the spacing. He can dash forward and maintain offensive pressure with this combo.

Bushin Gokusanken - Shu is executed by pressing Heavy Kick after Bushin Gokusanken - San. Zeku ends the combo by delivering a jumping spin kick, sending the opponent tumbling to the ground. Just like the aforementioned target combo, this move leads to a knockdown. It also inflicts more damage and has good corner carry. While Zeku can put his opponent in the corner with this target combo, he has less of an advantage on knockdown. Because the Heavy Kick knocks his opponent slightly further back, Zeku has less follow-up options on wake-up.

Executed by pressing down with a Heavy Kick after the third hit, Guy will perform a throw, which will send the opponent to the other side. Zeku's variant is the Bushin Gokusanage, in which Zeku falls backwards into a seated position, wraps his legs around his opponent's midsection, and flips the opponent in the air to the other side of the stage, ending in a one-armed handstand.

This move is the only option that ends with a throw. It is effective for switching sides with his opponent or putting them back in the corner. It is also has the highest damage output out of the prior target combos. This move can only be performed on the first hit of Zeku's Standing Hard Punch. 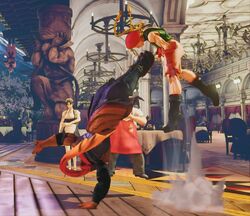 A Vintage Combo from the Final Fight series, this combo is good against standing opponents on corners.

The juggling time is short, so the player will have to quickly choose between EX Hozanto, Standing High Kick, Bushin Goraisenpujin, Bushin Hasoken or EX Bushin Senpukyaku. The Throw Option excludes Ultra 1 as a combo string.

Bushin Goraisenpujin and Bushin Hasoken can also easily connect after the Heavy Kick option without an FADC move, if timed correctly. Unfortunately, it is seldom used, as Standing LP cannot connect on crouching characters.

Retrieved from "https://streetfighter.fandom.com/wiki/Bushin_Gokusaken?oldid=223329"
Community content is available under CC-BY-SA unless otherwise noted.