The Bushin Jakura is one of Old Zeku's special moves, introduced in Street Fighter V.

Executed by performing a quarter-circle forward motion and pressing punch, Zeku performs a front handspring and launches himself high into the air, somersaulting a couple times toward his opponent before descending. How far forward he travels is determined by the strength of the punch button pressed; the EX version allows the player to control Zeku's jump while airborne. This move works similarly to Akuma's Hyakkishu.

Depending on which attack button(s) is used before he lands, Zeku performs a different follow-up. If there is no follow-up command, Zeku just launches himself closer toward his opponent without delivering any type of attack. Bushin Jakura can be use to force his opponent to make a mistake in anticipation of a follow-up.

Bushin Gekirinchu is executed by pressing any punch button during Bushin Jakura. Zeku performs an elbow drop to the opposite side. This attack is one of Zeku's crossup attacks. However, unlike Jumping Medium Kick, Bushin Gekirinchu only has a hitbox on the opposite side of Zeku. This means that this moves whiffs if his opponent is in front of him. Additionally, despite its appearance, this attack is not considered as an overhead, meaning that his opponent can block while crouching.

If Zeku manages to hit his opponent late with this move, he can link into Standing Medium Kick for a full combo. On block, Zeku can be +5 if the attack is performed prior to landing. If the attack is delivered too early, Bushin Gekirinchu can be unsafe on block. The EX version of this move can be performed only during EX Bushin Jakura. Performing the EX version inflicts more damage and stun. Zeku also has a faster recovery after landing.

Bushin Kirinkyaku is executed by pressing any kick button during Bushin Jakura. Zeku whips his leg on top of his opponent. During the kick, a trail of energy projecting from Zeku's foot creates a black slashing wave. A high-pitched, slashing sound of a sword plays as Zeku kicks. Unlike Bushin Gekirinchu, this attack hits in front of Zeku. While it inflicts the same damage and stun as Gekirinchu, it has a longer range and a downward hitbox. If properly spaced and timed, Zeku can use Kirinkyaku to catch his opponent by surprise in a pseudo-crossup attempt.

Like Gekirinchu, this attack is not an overhead. Not only his opponent can block Bushin Kirinkyaku while crouching, but they can also punish Zeku if he uses it too early. Zeku can be plus or minus on block, depending where he hits his opponent. It is critical to use this move when Zeku is closer toward the ground. If he manages to hit his opponent late with this move, he can link into Standing Medium Kick for a full combo. The EX version of this move can be performed only during EX Bushin Jakura. Performing the EX version inflicts more damage and stun. Zeku also recovers faster on landing. 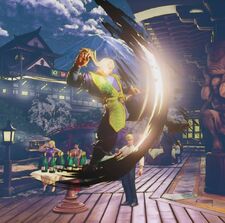 Bushin Tengen is executed by pressing Light Punch and Light Kick, (the throw command) near his opponent during Bushin Jakura. Zeku lands with both feet on top of the standing opponent's back. The force of his weight causes them to fall on their stomach. Zeku then leaps off of his opponent's back and flips over to the other side of the stage. This attack is Zeku's only throw option during Bushin Jakura. While this move is not a command grab, it cannot be blocked. However, his opponent can avoid the throw by crouching or jumping. It is great for keeping the opponent guessing and breaking through their defenses.

Compared to his other follow-ups, Bushin Tengen has the fastest startup and inflicts the most damage. Hitting his opponent with the command throw results in a side-switch. This move is a very effective meaty option during the opponent's wakeup. The EX version of this move can be performed only during EX Bushin Jakura. The EX Tengen inflicts a lot of damage similar to a command grab.