Executed by pressing two quarter-circle backward motions and all three punch buttons, Cammy goes into her counter stance. If the opponent strikes her, she counters by flipping onto their shoulders and snapping their neck. She then takes them down and snaps their arm with a reverse armlock. To top it all off, she spins the opponent around, grabs them by the neck, and brutally twists it.

Exclusive to this move, each time Cammy snaps/twists one of the opponent's limbs, the screen turns to negative (all colors inverted) - perhaps to emphasize the counter's brutality and the extreme pain felt by the opponent.

Like all counter attacks, the CQC is very useful in avoiding rush downs, as it counters various special attacks, as well as normal pokes. It can best be used as an anti-air to punish opponents who try to jump in on the player. However, the CQC itself is at a disadvantage against projectiles, armor breaking attacks and throws - as with all counters. Thus, the move itself must be used wisely and timed carefully by the user. 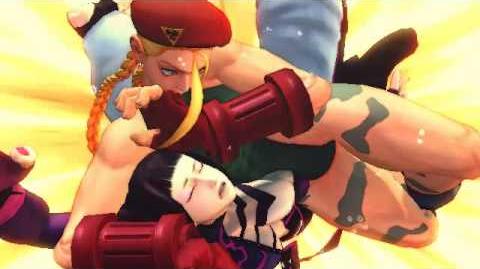