For the game, see Cannon Spike (game).The Cannon Spike (キャノンスパイク, Kyanon Supaiku?), also known as the Thrust Kick, is a special attack performed by Cammy, Juni and Juli. It was introduced in the Super Street Fighter II games.

Executed by performing a "Shoryuken" motion (forward, downward then down-forward) and pressing kick, the user launches in the air leg-first for a singular, powerful strike that often overpowers any aerial strike. Upon impact (whether hit or block), they flip backward a relatively safe distance, though some games increase the length of their recovery animation to increase chance of retaliation. The angle is determined by the kick button pressed. The Light version has the fastest startup and goes almost straight up. The Heavy version travels more forward and up. The Medium version's angle is somewhere in between.

The EX Special version introduced in the SFIV series has even less startup time, covers a longer horizontal distance and is completely invulnerable. In Street Fighter V, it has the fastest startup compared to the normal versions, making Cammy invincible in at the start of the move.

Also in Street Fighter V, the move can be enhanced while her first V-Trigger is active. Performing this attack allows Cammy to rise into the air and kick her opponent five times while alternating her feet, similar to Chun-Li's Tenshokyaku.

Cannon Spike is Cammy's main anti-air tool. This move is great for catching jump-ins. It is also a solid combo ender, doing more damage compared to Spiral Arrow. Players have to choose the right version of Cannon Spike for the right situation.

Finally, Cammy's V-Trigger version makes Cammy invincible in the beginning of the move. It is also a good combo ender, linking from V-Trigger Spiral Arrow. However, Cammy players should not throw this move out indiscriminately. All versions of this move are extremely unsafe on block. If the opponent successfully blocks it, Cammy will be vulnerable for punishes and heavy damage combos. 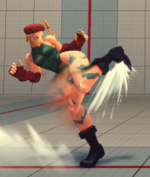 Cammy performing her Cannon Spike.
Add a photo to this gallery

Retrieved from "https://streetfighter.fandom.com/wiki/Cannon_Spike?oldid=211185"
Community content is available under CC-BY-SA unless otherwise noted.