The Cannon Strike (キャノンストライク, Kyanon Sutoraiku?) is one of Cammy's, Juni's and Decapre's special attacks, being used primarily by Cammy, and then used by Juni in Street Fighter Alpha 3 and by Decapre in Ultra Street Fighter IV.

Executed by pressing a quarter-circle backward motion and kick during a forward jump, Cammy/Juni/Decapre performs a stylish focused turning motion into a diagonal down-forward one-legged driving kick with deadly force. There is negligible difference between Cannon Strikes using different kick buttons. The Light version hits at a steep angle and travels a short distance. The Heavy version hits at a 45 degree angle and travels the furthest. The Medium version hits just in between the Light and Heavy versions.  Prior to the Street Fighter IV series, the move could only be used at the apex of a forward jump.

In the crossover games, the attack could knock down on even on grounded hit and possessed a "Psycho Power" effect on Cammy's leg. It also made Cammy dive down at a much faster speed, though she won't not dive fully all the way towards the ground as the move may stop mid-way depending on how high she's jumped. This trait carries over to Street Fighter IV, where Cammy also dives down slower than before compared to previous games.

The EX Special version introduced in the Street Fighter IV games has Cammy use both legs for the kick in the style of a drilling dive, and can be executed during any kind of jump, not just a forward one.

As of Ultra Street Fighter IV, in the style of the aforementioned crossover games, Cammy can now perform a Cannon Strike from her Hooligan Combination as well.

Also in Ultra Street Fighter IV, Decapre can now perform a Cannon Strike from her Scramble as well.

In Omega Mode, Cammy gets a version of Cannon Strike, called Target Strike, and Decapre gains the ability to make a Cannon Strike out of Scramble.

This move is a solid crossup tool, and good choice for closing in through the air or to quickly punish a whiffed attack especially on counter hit. However, if performed too high, the move may hit too early before the user recovers, making it less effective and very easy to punish. This is quite true for the Street Fighter IV series incarnation where Cammy doesn't dive down as fast and the move does not exactly last all the way to the ground. In older games, one also has to be aware of it being blocked due to Cammy/Juni bouncing off upon a blocked-hit, which also warrants an easy punish from those with solid gap-closers.

Mainly as of Street Fighter IV's removal of a specific height restriction, this move is now most effective when performed as close to the ground as possible (with proper spacing based on the starting height). The EX version can also confuse and catch foes by surprise in this regard, and its input can even be "Tiger Knee'd" for better results (via quarter circle back-to-back-up).

In Street Fighter V, it’s considered to be of her best tools to engage her enemies. Like previous incarnations, this move is ver effected when it is performed at the lowest jump-arc in order for it to be safe or lead into a combo. The lower Cammy hits her opponent with Cannon Strike, the more advantageous she becomes. Players try to hit the opponents anywhere below the torso to be safe, even when the move is blocked. Anything higher and Cammy may be punished or may not be able to combo.

Unlike the normal versions, the EX version travels all the way, from where Cammy activates the move till she hits the ground. The speed trajectory is also very fast, which is a good tool to pressure opponents. On hit it puts the opponent in a juggle state, allowing Cammy to apply even more pressure with potential mix ups or perform another special move such as Spiral Arrow or Cannon Spike to end the high damaging combo.

Cannon Strike is also used to bait out an ill-timed anti-air attacks or even throws. By mixing up Cannon Strike with regular jump-in attacks, opponents have to be prepared to deal with constant air attacks and pressure that Cammy brings.

The enhanced version when Delta Drive is activated is one of Cammy's best pressure tools. If she successfully hits, Cammy can link into a devastating combo. Also, even if the opponent blocks the V-Trigger Cannon Strike, Cammy is still advantageous, meaning that she can continue applying pressure to open up her opponents. 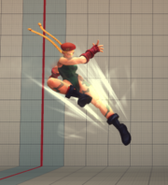 Cannon Strike (X-Men vs. Street Fighter)
Add a photo to this gallery
Retrieved from "https://streetfighter.fandom.com/wiki/Cannon_Strike?oldid=205742"
Community content is available under CC-BY-SA unless otherwise noted.