Capcom Fighting Evolution, released in Japan and Europe as Capcom Fighting Jam (カプコン ファイティング ジャム, Capcom Fighting Jam?), is a 2004 fighting game published by Capcom. It was originally released as an arcade game for the Namco System 246 hardware and ported to the PlayStation 2 and Xbox. The game features characters from three different incarnations of the Street Fighter series, as well as characters from the Darkstalkers series and the CPS III arcade game Red Earth, with each character employing the fighting system from the game which they represent.

The game consists of two-on-two endurance-style tag team matches. The player selects a pair of characters and then begins a match with the first one selected. If their current character is defeated in one round, then the player can choose to begin the next round with the other character.

The Darkstalkers characters have a three-level "Special Stock" gauge like in Night Warriors, allowing them to perform "ES moves" (Enhanced versions of their regular special moves) or "EX Specials" (their super moves). They can also perform "Guard Cancels" (a counterattacking special move) and "Chain Combos" (which allows them to link any basic moves with another one of equal or greater strength). Darkstalkers characters can air block and dash, as well as do standing-up attacks and move while they're down. Demitri and Jedah receives new sprites for this game (the former has his Midnight Bliss re-worked to matches the game's rating, while the latter has edited sprites of his maniacal evil laugh winning animation).

The Street Fighter Alpha characters have single-level Custom Combo gauge and can perform a specific Super Combo or a Custom Combo at MAX level. They can also air block and perform Alpha Counters or recovering rolls. Like Zangief, Guy's sprites were edited slightly for this game.

The characters from Red Earth have a Gem gauge which allows player to stock up to two gem afters the gauge fills up. When the player has a gem in stock, they can level-up their character and make them stronger or perform a Mystic Break super move. The Red Earth characters has a blocking technique called the "Ultimate Guard", which allows them to block all attacks (except throws) without consuming energy. They can also following an Ultimate Guard with an "Ultimate Counter".

The characters from Street Fighter III have a two-level Super Art gauge. Unlike in Street Fighter III, the characters in this game cannot select a Super Art move before battle, but they have access to more than one Super Art, as well as EX Specials, powered-up versions of their regular Special Moves. Players can also "parry" an opponent's attacks, which allows them to avoid an attack without damage and counterattack.

Ingrid is the only new character featured in the game, although she was one of the new characters intended to debut in the unreleased 3D fighting game Capcom Fighting All-Stars. She uses a unique fighting style with a three-level Super Art gauge. Ingrid makes a return appearance in Street Fighter Alpha 3 MAX for the PlayStation Portable.

Pyron is the game's final boss, and he uses the Darkstalkers fighting style. Shin Akuma is a secret boss that can be fought after Pyron if certain requirements are met, and he uses a modified version of the Street Fighter II style, having only one Super bar, but also being able to air block, dash and parry.

Capcom Fighting Jam: Original Soundtrack, an officially licensed soundtrack of the game, was released on December 12, 2004 in Japan only. This album features the original music found in the game composed by Noriyuki Asakura. The first pressing of this album came with an exclusive mini disc that featured both the vocal and instrumental versions of Ingrid's theme; 'Heat Haze' by Maiko Kubo. The cover artwork was done by Shinkiro.

The game generally wasn't well received; one of the reasons was due to the fact that all of the characters except Ingrid were literally copy-and-pasted from their respective games except with drastically cut-down animation frames. Comparisons were instantly drawn to the similar "Vs. series" games and the gameplay of this newest fighter seemed to lack the finesse of those earlier games. Many Street Fighter series favorites such as Ken, Cammy and Sagat were also relegated to the backgrounds of the stages instead of being playable characters (even though Sagat was planned to be in the game in his original Street Fighter appearance), which did little to aid the game's popularity. The game also received criticism that certain moves that the characters originally had were not available to the player, which led to some backlash from fans of the games. The game enjoyed a brief period of competitive play in Japan, but was soon dropped from most major tournaments.

Producer Yoshinori Ono has admitted that the game was essentially a salvaged version of Capcom Fighting All-Stars, and has also stated how the crossover, mechanics, and inclusion of the various gameplay systems inherent to each series lead to balancing problems. Ono also said that he replaced another producer who had been in charge of the game's creation until leaving during the middle of its production. 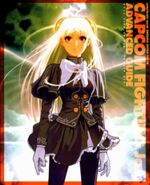 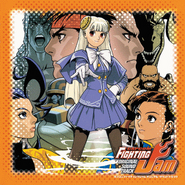 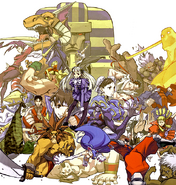 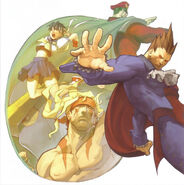 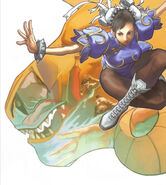