Unlike the Federal Bureau of Investigation (FBI), which is a domestic security service, CIA has no law enforcement function and is mainly focused on overseas intelligence gathering, with only limited domestic collection. Though it is not the only U.S. government agency specializing in HUMINT, CIA serves as the national manager for coordination and deconfliction of HUMINT activities across the entire intelligence community. Moreover, CIA is the only agency authorized by law to carry out and oversee covert action on behalf of the President, unless the President determines that another agency is better suited for carrying out such action.

In Street Fighter, the CIA is one of the organizations that investigates the dangerous Shadaloo and tries to bring it down. Despite ongoing and headstrong attempts to crack down on the criminal empire, they are usually foiled, along with many agents perishing during investigations. By the time of Street Fighter III, they are tasked to investigate the mysterious entity Q, who is suspiciously spotted around areas of disastrous accidents or crime scenes worldwide.

Deceased
Smalt Raven (スマルト・レイヴン, Sumaruto Reivun?) is an ace spy that was investigating Shadaloo before the events of Street Fighter IV. During his investigation, he located Balrog and Vega, confirming that they survived the destruction of the Shadaloo base in Street Fighter Alpha 3.[2][3] He later located a Shadaloo hideout, where he was killed by M. Bison.[4]

S. Raven is a mysterious man, not much being known about him. It is believed he was from C.I.A., and he has a special combat suit that apparently was able to discharge azure electricity.[1] His hairstyle resembles a raven, and he was seen wearing a blue shirt while disguised.

Alive
David Spender (デビッド・スペンダー, Debiddo Supendā?)[5] is a CIA agent investigating Q. As part of his role in the CIA, he investigates difficult cases alongside Juliana.

He is a realist, and does not believe in paranormal and supernatural phenomena. David is a distinguished and skilled agent with great confidence in himself, but is surprisingly frivolous outside of work. He loves basketball, and has many goods from the team from his hometown scattered across his desk.

Being deprived of her sleep[6]

Alive
Juliana Leigh (ジュリアン・リー, Jurian Rī?)[6] is a CIA agent seen in Q's ending from Street Fighter III: 3rd Strike. Juliana noticed that a man with trench coat and mask (Q) was present in several cases and shows it to Wayne and David, resulting on CIA starting to investigate him as a key witness from the events.

She is in charge of difficult cases at the CIA along with her partner, David, and actively believes in UFOs and supernatural phenomena. Often arguing with her partner, she has a tremendous passion for her work, with a deep interest in cryptids and monsters due to a strange pure-white being she met in her childhood that could change shape. She is a beauty, but is regarded as a bit strange by most people.

Alive
Wayne Nakamura (ウェイン・ナカムラ, Uein Nakamura?),[7] is an analyst for the CIA and the boss of David and Juliana, seen in Q's ending from Street Fighter III: 3rd Strike.

He was originally unnamed, which led many to believe that he was in fact Richard Burgman, until he was given a name in the Shadaloo C.R.I. profiles .

Richard Burgman (リチャード・バーグマン, Richādo Bāguman?) is the public relations officer for the CIA. In his report regarding Q, he states that the CIA is unable to make any official comment on the existance of the subject.[8][9] He does not appear in the game, and is only mentioned in supplementary material. The man seen with David and Juliana was originally believed to be Burgman, until it was revealed that he was Wayne Nakamura.

Ortega is a minor character from Street Fighter II V. He is the director of CIA. 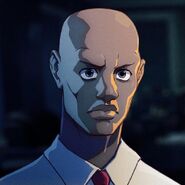 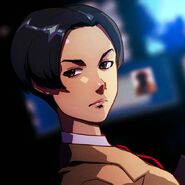 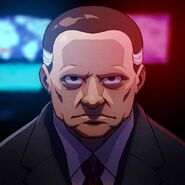 Wayne Nakamura
Add a photo to this gallery

Retrieved from "https://streetfighter.fandom.com/wiki/Central_Intelligence_Agency?oldid=221711"
Community content is available under CC-BY-SA unless otherwise noted.