The Collarbone Breaker (鎖骨割り, Sakotsu Wari?, "Collarbone/Clavicle Splitter"), known in the Capcom vs. SNK series as the Overhead Smash, is one of Ryu's Unique Attacks, introduced in Super Street Fighter II Turbo.

In the Street Fighter EX games, this acts as Ryu's Guard Break attack in the first two, and his Surprise Blow in the third game.

Executed by holding forward and pressing Medium Punch, the attack is a two-hit overhead crushing punch; Ryu draws his fist back over his shoulder and thrusts it forward and down, hitting the opponent's collarbone.

As an overhead attack, the main purpose is to break through the defenses of an opponent who insists on crouch guarding (as the attack must be blocked from a standing position). The draw back causes considerable delay, and this attack can easily be countered by an aggressive opponent by hitting Ryu before he throws it; if used against a defensive opponent who is blocking low, this can get around their defenses relatively quickly.

However, it does two hits, which is enough for a frame advantage to apply pressure with on block, or to hit-confirm into attacks with. In later games, due to a more smooth transitioning animation from the delay to the actual punch, trying to see it coming may be a bit more difficult compared to games such as Street Fighter II and/or the Street Fighter Alpha series.

In Super Smash Bros. for Nintendo 3DS/Wii U and Super Smash Bros. Ultimate, this move has high shield damage and can destroy shields if they are not at full vitality, allowing Ryu to perform a follow-up combo or even a KO. However, if the opponent is standing at the stage's ledge and Ryu breaks their shield, they will be sent falling downwards and into the void. 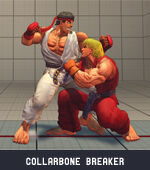 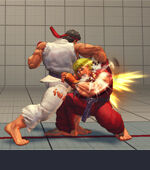