A Command Dash is a Dash in Street Fighter that are listed as special attacks.

Command Dashes all have different uses. Some can be used for further pressure and others can be used for resets. Some characters gain command dashes in powered up V-Trigger states. It is recommended for players to learn the frame data on their dashes so they avoid being punished. In Street Fighter V command dashes that pass through the opponent are good for opponents that use attacking V-Reversals a lot, as they usually avoid the reversal and allow a punish. Non EX dashes tend to be negative on block and even punishable when special cancelled into. 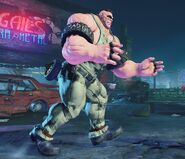 Zeku's Idaten
Add a photo to this gallery
Retrieved from "https://streetfighter.fandom.com/wiki/Command_Dash?oldid=214329"
Community content is available under CC-BY-SA unless otherwise noted.