The Corkscrew Cross (コークスクリュークロス, Kookusukuryuu Kurosu?) is Dudley's second Ultra Combo in Super Street Fighter IV. It is an advanced version of the Corkscrew Blow.

Executed by pressing two quarter-circle forward motions and all 3 punch buttons, Dudley attacks the opponent with a left-handed Corkscrew Blow. If it lands on the first hit, it sends the opponent flying back in a cyclone.

Dudley then follows up by rushing towards the opponent (who at that point is still trapped, spinning in the vortex), calling the attack's name, and proceeds to deliver a final powerful cross punch, right-handed, at the opponent's chest. An instant later, the strike violently propels the opponent in a spinning motion, back-first, directly into the "invisible side wall" of the stage. The opponent spins gradually slower before falling on their knees, crumpling to the ground as Dudley turns sideways from them and fixes his bow tie stoically.

This attack is reused as Dudley's Cross Art in Street Fighter X Tekken.

The attack has Armor Break properties, and like the Corkscrew Blow, it can be used against airborne foes, especially on jump-ins. Though lacking in range and damage, the move has exceptional juggle properties and combo opportunities; most notable is the lack of need for Focus Attack Dash Cancels.

Dudley can combo into Corkscrew Cross via a light Jet Upper or EX Machinegun Blow, the latter of which can often be followed with another move such as a Ducking Straight/Upper or a crouching heavy kick. He can also use an EX Short Swing Blow and FADC into the Corkscrew Cross; this setup presents the best chance of dealing maximum damage via landing the first hit and initiating the animation.

It is also possible to follow-up an EX Cross Counter that lands near the corner with the Corkscrew Cross. 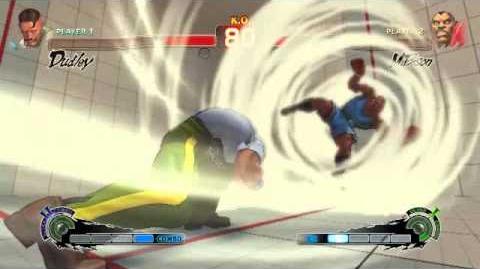