Baseball, soccer, local alcohol from his home region[1], his younger sister, Blair Dame, being a gentleman

Crowding together with others[1], King Bharat, his father

"Nobody can stop my fists!"
—Jack (Street Fighter EX)

Cracker Jack has shoulder length dark brown hair in a wavy style. His eyes are concealed by his hat.

In his alternate appearance, he wears a black formal vest with a red long sleeve button shirt with a long white neck tie on the collar, black formal pants with a white belt on his waist and white shoes. His fedora hat is black with red linings while his hair is black and he fights barehanded.

In Street Fighter EX2, he wears a white formal suit jacket with the sleeves folded into cuffs and a flower on the left side of his jacket, his button shirt is brown (black in-game), no longer sleeveless and also folded into cuffs to match his jacket. He has white suspenders beneath the jacket. His pants are white, his shoes are brown and his fedora hat is pink with black linings. He doesn't wear a tie but wears a silver watch on his left wrist and a single brown fingerless glove on his right hand.

In Street Fighter EX3, his button shirt is pink, he wears black gloves again and has a ring with a red gem in the center.

In his Shadaloo C.R.I. profile art, his button shirt is maroon, he wears dark fingerless gloves, dark shoes and gold bracelets in each side of his wrist, his hat is white with maroon linings and his brown belt has a gold square buckle at the center.

In Fighting EX Layer, Cracker Jack's outfit has a western cowboy design; he wears a white cowboy hat with black linings in place of his fedora hat, a white western formal vest with a black short sleeved openly button shirt and a large collar, white pants with a brown belt, matching brown chaps in each sides and brown shoes with spurs. He now wears a red tie with white designs on his neck and his black gloves from Street Fighter EX3. He is also equipped with brass knuckles in both of his fists. Beneath his cowboy hat, Cracker Jack has fringes in each sides to cover his eyes and has rope which is holstered on his right.

Jack is a laid back if temperamental individual, who often tends to seek to live his life as easygoing and freely when he can. On the other hand, Jack has been known to be extremely head on, if confrontational at times, but as his hobbies and interests show, he seeks to channel his competitive streak recreationally and constructively, and only comes to talk with his fists when push comes to shove by someone else trying to aggrandize or antagonize him. As his storylines tell, Jack will also do what it takes to wrap up messes he involuntarily starts or will take drastic measures to cool the heat by those who are hot on his trail.

Cracker Jack's appearance is based on Daisuke Jigen from the famous and renowned Lupin III manga/anime series. Additionally, C. Jack's Japanese voice actor, Banjō Ginga had voiced Jigen in the Lupin III anime movie The Plot of the Fuma Clan.

Other minor inspirations may include actor Burt Reynolds, and to his pre-mustache days in the late 1960s and early 1970s, specifically for his roles as a lovable rogue character, from Robert "Gator" McClusky from White Lightning and Gator, to Paul "Wrecking" Crewe from the original 1974 incarnation of the prison sports underdog movie The Longest Yard.

During the development of the original Street Fighter EX game, he wore a green outfit with a red tie, and a green and red hat. [2]

Jack was once a powerful bouncer from Las Vegas who was known for his unstoppable fists. He was the top member of the bodyguard group known as the "Crackers", but left to live his life freely, as well as to finish a fight with his rival. When a certain criminal organization decides to go after Jack for unknown reasons, he decides to elude them by becoming the bodyguard of Blair Dame, the daughter of a wealthy European family, when she decided to travel the world.

Jack disappeared after the trip was over, only to reemerge when an underground fighter named King Bharat kidnapped his younger sister. Jack defeated Bharat and rescued his sister, only to be pursued again by the organization he was eluding. Eventually he was forced to go to Blair's mansion to hide there for a while.

The Power Fighter Cracker Jack vanished from this world for a while after the fight was over. Nobody knew what became of him or where did he went. All that was a certain was that he would return, along with his fists of great strength. "Nobody can stop my fists!"

"Nobody can stop my fists!" The Power Fighter Cracker Jack vanished from this world for a while after the fight was over. Nobody knew what became of him or where did he went. All that was a certain was that he would return, along with his fists of great strength.

The last match has begun. The two rival warriors with an unsettled childhood rivalry crossed fists.
"The strongest will decide who was right and who was wrong!" An explosive sound shook the ring the moment after the gong rang three times.
"You've become stronger this time as usual. I shall keep my word and give you back your little sister."
"Our dispute has been settled now that I've finally fought you...That is all."'
Jack, a man who aims for the top power. Where will his fists show up next...?

Right now, Jack's biggest concern was the pursuer hired by the syndicate to track him down. He blended into the colorful neon, as he muttered to himself "I wonder what will be the best place to lay low for a while..."

Both his ardent fans and the secret organization have hunted Jack since the tournament ended. He thinks, "I'd better find a place to hide." as he desappears into the darkness...
...A couple of days later.
SEBASTIAN: "My lady! My lady!"
BLAIR: "What's the matter Sebastian?"
(She hears a sound behind the butler)
JACK: "Hey, Blair! Why don't you let me stay here for a while.."

Cracker Jack appears as one of the playable characters in Fighting EX Layer, Arika's spiritual successor to the Street Fighter EX games.

In order to protect the honor of his boss, Jack silently withdrew from the organization he was a member of and left in America, going into hiding at a ranch. After learning that Vulcano Rosso is searching for him, Jack begins to suspect the Organization has put out a hit on him, he prepares for the worst. Unbeknownst to Jack, Rosso already left the Organization to start his new life as a detective, and was hired by Blair to find Jack before the organization does.

Cracker Jack's fighting style is similar to Balrog's (even sharing some of the same moves in command input and name), though he can kick and also wields a baseball bat. Some of his moves can deflect projectiles by swinging his bat or kicking them away; he can also use his bat as a close range weapon to beat opponents in one of his Super Combos. His Meteor Combo has deliver a devastating kick to his opponent and then swinging his baseball bat to his airborne opponent skyward (this combo does more damage the more projectiles Jack deflects in a round).

In Fighting EX Layer, he retains most of his moves in the Street Fighter EX series, gaining some speed, agility, and combo potential. 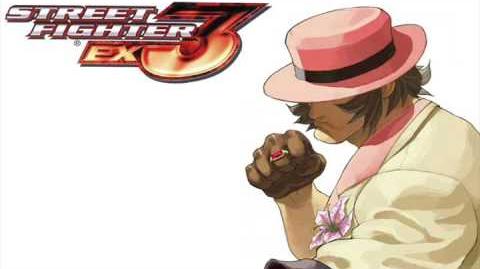