The Cross Counter (クロスカウンター, Kurosu Kauntaa?) is one of Dudley's special attacks, introduced along with him in the Street Fighter III series.

In boxing, a cross-counter is a cross thrown above an opponent's jab, done in order to exploit the sudden opening in their position and maximize damage.

Executed by performing a half-circle backward motion and pressing punch, Dudley drops his fists and sticks his chin out ("Go on, then!"). If Dudley is struck (except via low-hitting attacks, throws or projectiles) by the opponent while in this state, he will take the damage normally, but a glint will appear in his eye and he will suddenly slide forward with a fast straight punch (Dudley shouts the technique's name in the Street Fighter III games; in the Street Fighter IV games, the screen darkens partially as he quickly turns his back, calls the attack's name and unleashes the counter, in a similar way to Balrog's Turn Punch).

The EX Special version introduced in the Street Fighter III series has Dudley in "ready" position for an even longer time (4 arm "swings") than the light punch version ("Can't touch me!"); if triggered, Dudley suffers twice the enemy attack's damage but unleashes two (three in Street Fighter IV games) consecutive unblockable sliding punches back and forth across the opponent, with the last hit launching the opponent upwards, allowing for juggles.

The sudden counterattack is unblockable, and the damage inflicted is greater than (and apparently proportional to) the damage Dudley suffers. This move can even counter Super Arts and other such moves (as shown below).

However, as with normally applies to counters, Cross Counter will not work against:

The latter property is unique to this move, in keeping with Dudley's boxing technique. This somewhat limits the attack's usefulness, as it is easily punished: Dudley is stationary while in the "ready" position and if he throws it out randomly, he can do nothing to stop an opponent from launching a projectile or walking up to throw or sweep him, so this technique must be used with absolute accuracy. The Cross Counter can also be beaten by Armor Breaking moves in the Street Fighter IV series. Another key point worth considering is, despite being unblockable, the counter itself is not invulnerable, as an enemy attack performed fast (and powerful) enough may easily suppress the counter before it can reach the opponent (see below).

However, it can still be useful when Dudley can bait an attack, and wait until the last second possible to enter the counter. Furthermore, moves with slow start up provide a perfect opening for this move.

If Dudley is in the "ready" position with low health and the opponent does enough damage (excluding low-hitting attacks, projectiles and throw moves) to knock him out, the "KO" graphic will appear on the screen, Dudley gives off his "defeated" voice scream while performing the Cross Counter as usual (which at this point deals no damage despite landing the punch(es)) and collapses stomach-first right after. For this reason, the player must carefully consider the damage Dudley takes in return for the counter (specially in the EX version) so that his health doesn't get too low to sustain the fight. 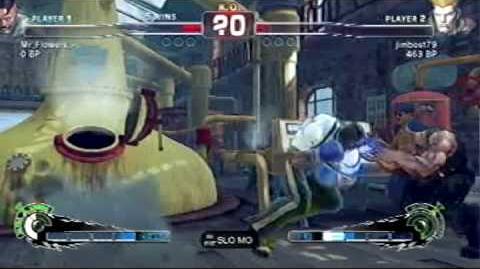