Cyber-Akuma, known in Japan as Mech-Gouki (メカ豪鬼, Meka Gōki?), is a video game character originating from the Marvel vs. Capcom series, first appearing in Marvel Super Heroes vs. Street Fighter as the final boss. He is a cyborg version of Akuma under control of Apocalypse.

Mechanically enhanced by Apocalypse, Cyber-Akuma's upgrades include a mechanical right arm (dubbed "Booster Rocket"), metal wings, and four extra arms that are only seen in one of his win poses.

Because of Apocalypse's control over him, Cyber-Akuma's personality is vastly different from that of the original Akuma's, being more servile (as reflected in his win quotes).

Cyber-Akuma is fought after the player defeats Apocalypse, in a 2 on 1 match. He has the highest stun and stamina rating in the game with a high speed rating to compliment. Cyber-Akuma has his own variation of the Shun Goku Satsu dubbed "Shining Gou Shock" that hits 24 times and is more damaging than the original. He can also perform an aerial variation of the Shining Gou Shock. The kanji associated with Cyber-Akuma is "destruction" (滅, metsu?). However, unlike the usual denotations, it has no hidden spiritual meaning's and are simply the orders of his master, Apocalypse. Cyber-Akuma is playable using an in-game code, but cannot have a partner.

Cyber-Akuma's movelist consists of enhanced versions of Akuma's moves, as well as attacks involving the launching of his mechanical right arm. All of his moves are renamed to more "mecha" sounding ones.

Cyber-Akuma appears in the backup story of Street Fighter Unlimited #10, where he battles Ken alongside other non-canon characters Mech-Zangief and Zero Akuma. The story's ending reveals that the whole thing was actually an unreleased video game (inspired by Street Fighter 2010) being played by Mel Masters while Ken and Eliza watch.

Cyber-Akuma appears as an alternate costume for Akuma. Rather than constantly showing his wings, Cyber-Akuma instead has them withdrawn into his back, only appearing during certain attacks, likely as a way of keeping the silhouette readable in competitive play.

Cyber-Akuma's costume colors as they appear in the home versions of Marvel Super Heroes Vs. Street Fighter.

Cyber-Akuma featured in a variant cover for issue #9 of Street Fighter Unlimited by UDON. 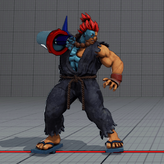