The Cycloids (サイクロイド, Saikuroido?) are a group of characters that appear in the Street Fighter EX series. They appear as featureless humanoids, with their moveset acting as a composite of moves from several other characters.

A blue and a red Cycloid, dubbed Cycloid Beta and Cycloid Gamma respectively, appear as bonus unlockable characters in Street Fighter EX Plus.

Another blue Cycloid appears in Street Fighter EX2 Plus as an unplayable character, acting as a dummy in the Excel Break bonus stage, where it has to be defeated by using Excel combos. If the player fails the bonus stage, the Cycloid will briefly imitate the player character's victory pose. It can also appear running in the background where the high score table is shown, if the player holds start while choosing the random select option and clears the game achieving the highest score.

A pink Cycloid that the player can beat up on also appears during the credits. Using cheat devices to play as the Cycloid reveals that it has no hitboxes and cannot hit the opponent or receive damage, unless the opponent is in Excel state. If it tries to throw the opponent, a tech hit will always occur. There is also a red Cycloid (which becomes pink in Excel mode, indicating it is the same one that appears in the credits) and a green one.[1]

Generic grey Cycloids appear in Street Fighter EX3, however they are only available through the use of cheat devices. Unlike the previous game, they are able to hit the opponent as well as receive damage, and the camera will rotate if they attempt to throw the opponent. In addition, Ace is also introduced, a character who can be customised with moves from other characters, and essentially replaces the roles Cycloid Beta and Cycloid Gamma provided in Street Fighter EX Plus α. 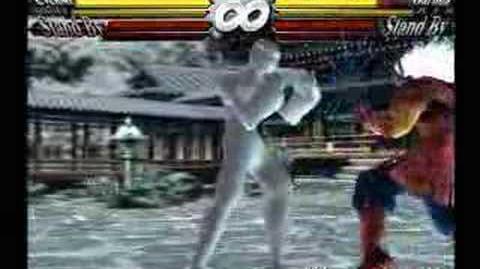 Cycloid in ex3
A grey Cycloid being used in Street Fighter EX3 via a third party cheating device.