Damnd (ダムド, Damudo?), is a character from the Final Fight series. He is a member of the Mad Gear Gang and the boss of the first stage of Final Fight, Metro City's Slum Area. He was also known as "Thrasher" in the western localisation of the original Final Fight.

Damnd is a large Afro-Caribbean man (from the Dominican Republic) with white dreadlocks, each ending in a number of blue beads. He wears a waistcoat, blue sunglasses, turned-down boots and various jewellery. He is always seen with a large grin on his face.

Damnd was a top lieutenant in Belger's Mad Gear Gang, and was in control of the gang's information network, including having intel from the local police and the FBI.[1] When Mayor Haggar refused to accept kickbacks and let the gang do as it pleased, Damnd kidnapped the mayor's daughter Jessica and phoned him, telling him to turn on the TV. When Haggar did so, he saw that Damnd was on air, laughing maniacally as he broadcasted images of the kidnapped Jessica and telling Haggar to be reasonable. Haggar refused their ultimatum and he went with Cody and Guy to the slums of Metro City to rescue her. Soon Cody found Damnd with Jessica in the Slum Area. Damnd retreated while his cronies held Cody and Guy at bay, and though Cody soon caught up to him, Damnd had by then successfully passed Jessica on to accomplices, and she was nowhere to be found. Despite initially getting the jump on Cody, the street fighter beat him senseless to get information on Jessica's whereabouts.

Damnd is the first boss. He asks some questions to the player's character before the fight, and loses a bit of health depending of the answers.

Damnd appeared as a playable character in Final Fight Revenge.

Damnd can be seen in the background from a stage in Street Fighter Alpha 2.

Damnd appears alongside Sodom in Chun-Li's ending from SNK vs. Capcom: SVC Chaos.

Damnd appears as a card in the SNK vs. Capcom: Card Fighters games.

Damnd is a boss in Capcom Quiz: Hatena? no Daibouken.

Damnd makes an appearance in the Mad Gear Hideout stage from Street Fighter × Tekken and Ultra Street Fighter IV, where he is seen punching the taiko drum with his fists alongside Axl. Once Haggar appears, he is seen knocked out on the floor. In the PlayStation Vita version Damnd and Axl are tied up by Haggar.

A statue of Damnd can be seen in the background of the New Metro City stage from Marvel vs. Capcom: Infinite.

Damnd appears in the Street Fighter cartoon episode Final Fight, where he assists Rolento to kidnap Jessica. He later attacks a train, where a disguised Ryu and Ken defeat him to join the Mad Gear gang.

In Super Street Fighter #1, Damnd, J, and Mic eat in the Chinese restaurant owned by Yun and Yang. Damnd refuses to pay the bill, saying that asking him to pay is an offense and menacingly ordering another free meal to calm him down, resulting in him being beaten by the twins.

Despite his size, strength and agility, Damnd is a cowardly fighter who often retreats to a perch on a wall and whistles for reinforcements. When his reinforcements prove insufficient, he leaps from his perch and attempts to land on his opponent. Damnd will also occasionally take a moment to laugh at the hero. Aside from this, Damnd's fighting style is that of the typical Mad Gear punk.

Damnd's appearance in the original version of Final Fight. 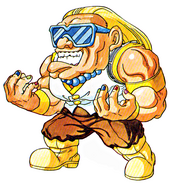 Damnd's appearance in Mighty Final Fight.
Add a photo to this gallery

Damnd in Final Fight One. 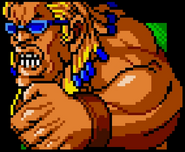 In the Mad Gear Hideout stage.
Add a photo to this gallery

Damnd / Thrasher in the Street Fighter cartoon.
Add a photo to this gallery

Retrieved from "https://streetfighter.fandom.com/wiki/Damnd?oldid=157297"
Community content is available under CC-BY-SA unless otherwise noted.