Takashi Nagasako
Darun Mister (ダラン・マイスター, Daran Maisutā?) is a video game character from the Street Fighter EX series, first appearing in Street Fighter EX as a secret character. He is an Indian wrestling champion and personal bodyguard for Pullum Purna.

Darun is a dark-skinned Indian who has a muscular build somewhat close to Zangief. He has short black hair, a matching sharp mustache, an red Bindi mark on his forehead and eyes with no visible pupils. He wears black wrestling shorts with a matching black wrestling belt and boots. He also wears gold bracelets in each sides of his wrists.

His alternate appearance consist of light orange wrestling shorts and a black strap on the center on his wrestling belt. He is barefoot, barehanded and wears gold leg warmers. His outfit is his traditional wrestling attire.

In Street Fighter EX2 and onward, he has black wrestling trunks, his boots have gold designs in each sides and his gold bracelet on his wrists also have designs.

In Fighting EX Layer, Darun remains largely the same only he is accessorized with a black championship belt with a gold elephant emblem at the left side, and red and white checkered sash tied at the left side on his wrestling trunks as its ribbons are hanging loose.

Darun Mister's appearance, as well as his fighting style, are largely inspired by The Great Gama, a well known Pehlwani wrestler active from the 1900s to the 1930s.

Besides The Great Gama, Darun is possibly based on a well known Turkish wrestler, Koca Yusuf.

Darun hears of Zangief's legendary wrestling prowess and, bored with his inferior opponents, seeks out the Russian to prove to himself that he is indeed the world's ultimate fighter. He also acts as a bodyguard for Pullum.

Darun obtained the opportunity to battle the masters of the world once again. The fruits of his journey will soon be known during his future activities. Darun will be keeping himself busy forever, or at least as long as the young lady is around.

Darun thinks to himself, "Young lads have no guts to these days!" At that moment, Darun discovered a new purpose for himseplf. Sometime later... Darun can be heard training his students, "Indra Bridge! Ten times! Now! One, two, three... You fools! That's not Indra Bridge! That's an ordinary bridge!" It may be a while before we see the successor of Darun...

Darun is an Indian bodyguard who accompanies his employer Pullum, while she enjoys her travels across the world, fighting strong warriors. He is the champion of Indraut (インドラウト, Indorauto?), an Indian version of wrestling where only bravest participate. He is friends with Zangief, with whom he has a mutual understanding with. They also had formed a tag team at one point called; "Ultimate Meteo Tag Team".[1]

Though Darun does not make a physical appearance in Street Fighter V, he is the friend to whom Zangief entrusted his "chess piece" to and later gives back when it is needed to defeat Shadaloo.[1]

Darun appears as one of the playable characters in Fighting EX Layer.

After being spoke by the God of Indraut from his dream, he resigned his role for being as Pullum's bodyguard and made his way to Japan. He was utterly defeated by Garuda and left on the verge of death but was protected and rescued by Gougi. Darun later recovers from his serious injuries and becomes a completely determined person in order to defeat Garuda once again.

As a wrestler, Darun's fighting style is similar to Zangief's. He also possesses similar full-circle moves, known as Indra Bridge and Brahma Bomb, his signature throw is a spinning DDT, and his signature move is a flipping power bomb. His Dusk Lariat is a series of clotheslines.

In Fighting EX Layer, Darun retains all of his moves from the Street Fighter EX series. His Brahma Bomb deals heavy damage to his opponent, his Lariat has flaming properties and his Indra Bridge gains additional damage when the opponent falls on impact after execution.

Throughout the EX series, Darun utilizes his moves in Indraut Wrestling.

His first Super Combo is the Dusk Lariat; Darun unleashes a series of lariats to his opponent four times. In Fighting EX Layer, it gains flaming properties. His second Super Combo is the Indra Bridge; Darun arches his back into a bridge position striking the opponent with his abdomen, this bounces them high into the air where they can either fall back to the ground or be caught with a combo extender. His third Super Combo is the Supreme Brahma Bomb; Darun grabs his opponent and jumps high into the air while flipping his opponent over into a power bomb, dealing heavy damage on impact. This move is similar to Zangief's Final Atomic Buster Super Combo and his Ultimate Atomic Buster Ultra Combo. In Fighting EX Layer, his execution of the move is no longer skyward as Darun normally jumps to execute the move but in a slower pace. His Meteor Combo is the Gamble of Darun known as G.O.D. for short. During this execution, while the button input command is on screen, Darun begins to headbutt his opponent followed by utilizing all of his basic wrestling techniques to deal more heavy damage. 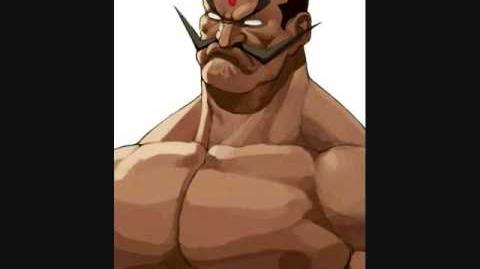