Ingrid (Unknown parentage level, but they share the same bloodline)

Death (デス, Desu?), real name Avel (アヴェル, Averu?), also known by his emblem 13 / T.K.O.D, is a character who was originally supposed to appear in Capcom Fighting All-Stars as one of the four original characters.

Death is a Code Holder who has planted a bomb, dubbed Laughing Sun, within Metro City. Mike Haggar contacts the other three Code Holders, D.D., Rook and Ingrid, to come in and defuse the bomb. He apparently has a deep and strange relationship with Ingrid,[1] what this is was never revealed, however they both share the same silver colored hair and both are natural and original Code Holders since their birth.[2][3] Also, while Ingrid has longevity, Death has a shorter life span,[4] and his body scrambles due to his small time. He has the capacity of manipulating Dark Matter and use at his favor.

Death's atomic bomb time limit in Metro City is connected with the time of his demise.The reason of why Death wanted to bring that chaos is to gain Ingrid's attention, since he somewhat wants to stay with her in his final moments.[5] 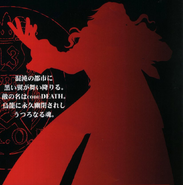 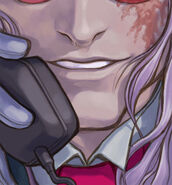 Death on the phone to Haggar

Poster of Death, alongside defeated opponents including Poison 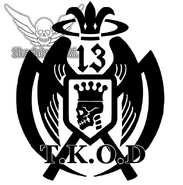 Death’s emblem
Add a photo to this gallery

Retrieved from "https://streetfighter.fandom.com/wiki/Death?oldid=174586"
Community content is available under CC-BY-SA unless otherwise noted.