Death Cross Dance (デスクロスダンス, Desu Kurosu Dansu?) is one of Juli's and Juni's super combos, introduced in Street Fighter Alpha 3, only available while controlling the former in Dramatic Battle Mode.

Executed the same as the Shun Goku Satsu - by pressing light punch twice, forward, light kick, and heavy punch quickly - Juli will slide forward with a midsection backhand. If it connects, she will attempt to grab her opponent, which will only succeed if Juni is nearby (and not in the middle of an animation). Juni will teleport to the other side of their opponent, and the two will launch into a barrage of punches and kicks before launching a multi-hitting dual Spining Arrow that crosses the opponent over. The Death Cross Dance is a 17-hit combo if landed correctly.

This attack is very hard to land practically, but a good way to set it up is to chain it from a standing Light Punch, which will stun the opponent long enough to hit the sliding backfist; however, Juni must still be near the opponent to launch the remainder of the attack. However, as it does only a very small amount of damage, it is generally considered to be tactically worthless. 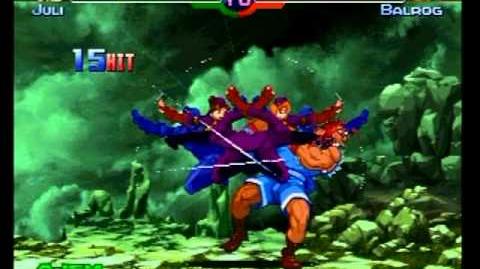