Delta Red (デルタレッド, Deruta Reddo?) is the SIS Special Operations Unit that Cammy is a part of.

Delta Red is a special force with headquarters set in the United Kingdom. The group is active in a wide range of fields, including searching criminals on a global scale, protecting important people, maintaining security, and reconnaissance. Only the most elite of soldiers are selected to join Delta Red, and each team is made up of four to five members. Personnel includes about 3500 people.[1] The Delta Red logo is an upside down red triangle.

Delta Red appears in Cammy's storyline in Street Fighter IV. In the beginning, Colonel Wolfman briefs Cammy on her mission when she was supposed to be on her day off from duty. He drives a van while briefing Cammy about the mission. In her ending, the team are at an unknown location, presumably at a lava-infested area. They were standing on a ledge of the cliff near the lava infestation. Cammy tells the Colonel that she disobeyed orders by destroying the BLECE data on the computer following a near disturbance by C. Viper. Colonel Wolfman said that he was monitoring her every movement during the mission. With a thumb up, Colonel Wolfman quoted to Cammy "Well done".

The members of Delta Red are recurring characters in the Street Fighter cartoon series, where they are considered an elite group of operatives from the Security Service (MI5). In the series' continuity, Cammy is a former member of Delta Red, having left them some time before the series to join the Street Fighter organization. Notably, they managed to capture Bison once, only for Shadaloo to hold the whole United Kingdom hostage until their leader was released. They later worked with the Street Fighters in order to reverse Cammy's mental conditioning into serving Bison.

The roster of the team is largely the same as in the games, but with different names: Col. Wolfman is called "Burke", McCoy is called "Rory" and Lita is called "Celia". In addition, George does not appear in the series.

Delta Red appears in four episodes: "Chunnel Vision" in season 1, and season 2 episodes "Cammy and the Bachelor", "Cammy Must Die!" and the series finale, "Cammy Tell Me True".

Delta Red is present in the UDON comics' Street Fighter universe. Cammy first comes into contact with Delta Red after being left amnesiac in front of the British embassy in Italy. Though instead of Vega leaving Cammy there, it is due to Rose who encountered and removed M. Bison's brainwashing over Cammy, who has no memory of anything leading up to that moment, but a terrorist attack on the embassy suddenly triggers her latent fighting ability and she foils the threat, after which Delta Red promptly sign her on as a member. While completing missions with Delta Red, Cammy pieces together remnants of her memory and does her best to make up for any sins she might have committed in Shadaloo's name.

During the second series, Cammy takes a leave from Delta Red to find out more about her past. She travels to Mexico with Chun-Li to meet T. Hawk for a joint investigation, but they are intercepted by M. Bison, who recaptures her and demands she represent Shadaloo in the upcoming tournament he is hosting.

Cammy is brought back to Shadaloo where her brainwashing is resumed during the third series (Street Fighter II Turbo), but Vega frees her from the brainwashing before the tournament finishes. Cammy acts as though she is still under Bison's command but enlists the help of Chun-Li and Guile. In the aftermath she has rejoined Delta Red.

In later issues of the comic series, a new special operations team known as Delta Blue appears. The team's members include Cammy, Juni, Juli, Abel, and George Ginzu. Cammy acts as the team's leader, while Juni acts as the team's covert ops specialist, Juni acts as the hand-to-hand combat specialist, Abel is the team's heavy weapons expert, and Ginzu serves at the team's computer expert. The team first appears investigating one of the Secret Society's laboratories located in the Arctic Circle, and come into a confrontation with several of the Society's heavily-armed troopers. Ginzu is shown piloting a giant mech suit armed with missiles, which is later put out of commission by Necro.

Cammy in the cartoon

Celia in the cartoon (based on Lita Luwanda)

Burke in the cartoon (based on Colonel Keith Wolfman)

Rory in the cartoon (based on Matthew McCoy) 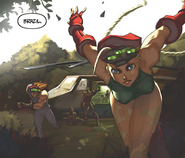 Delta Red arrives in Brazil, led by Cammy, in the UDON comics.