The move was first mentioned by its Japanese name in Street Fighter III: 3rd Strike, where Akuma had perfected the technique through unknown means; in his ending, he used it to destroy the remains of a sunken liner ship that sat on the ocean floor.

Executed by pressing up twice and pressing all three kicks, Akuma turns away from the opponent before delivering a high roundhouse kick that sends them several feet into the air, zooming after them with an extremely powerful Tatsumaki Zankukyaku that envelops him in a whirlwind. As he hits his opponent, a giant red kanji of "heaven" (天, ten) appears in the background, acting as a sort of "wall" against which the opponent is pinned until Akuma flies through them with the Tatsumaki Zankukyaku, shattering the kanji and sending the opponent tumbling to the ground.

If an opponent is "chipped out" (i.e. knocked out while blocking) by the move, the Ultra Combo will end there, with the opponent flying back silently and in slow-motion while the background turns to Akuma's signature black-and-white backdrop.

In the original Super Street Fighter IV, the teleport-canceled version only dealt 400 damage on a full Revenge Gauge, and the hitbox was only slightly bigger than the regular version. Starting from Super Street Fighter IV: Arcade Edition, its hitbox is now large enough to hit any crouching character, and in the AE 2012 update, the damage was slightly increased to 421.

By itself, the move is very damaging, dealing 500 damage when used with a full Revenge Gauge, half of Ryu's health.[1] However, it is considerably ill-favored by other players because of how easy it is to dodge. The opposing player can either block, crouch or back dash away from the attack, leaving the user wide open to a counterattack.

The main use of Demon Armageddon lies in its ability to be used during his teleport; when performed this way, it can either be a combo finisher, a safety net against characters that are able to chase Akuma's teleport down, or a punisher for moves with long recovery times.

Akuma can cancel his crouching medium attacks, close standing medium attacks, and any of his heavy punches into a teleport and connect the Demon Armageddon successfully (the far standing heavy punch cancel being possible only in Ultra Street Fighter IV). The timing to cancel the medium moves into the teleport and Demon Armageddon is extremely strict, while the heavy punches are more lenient on timing due to increased hitstun. It can also hit any character following a very well spaced Zanku Hadoken (regular or EX) as long as they are not crouching (in which case a teleport cancel is required).

After a crumple as a result of a Focus Attack, the Demon Armageddon by itself can still hit certain characters (mostly tall characters).

Due to pre-jump frames, it is also possible to do the Demon Armageddon without doing any buffering whatsoever, but the difficulty and the time frame to do so (four frames) makes it very impractical and nearly impossible to incorporate in actual gameplay without significant modifications to a controller.

The boss version of Akuma can also combo several normals into the Demon Armageddon, the most notable one being standing hard kick.

It should be noted that Akuma when he cancels into this from Ashura Senku the vertical hitbox of this attack extends downwards to ensure the attack connects and can't be Low Profiled by attacks such as Ibuki's Neck Breaker.

Oni is finished by the move with chip damage. 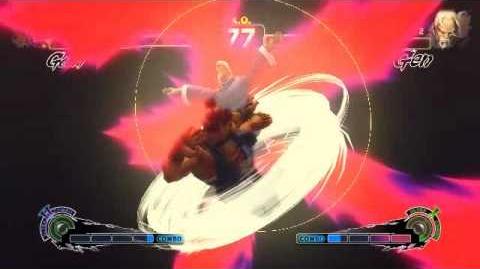 Retrieved from "https://streetfighter.fandom.com/wiki/Demon_Armageddon?oldid=224708"
Community content is available under CC-BY-SA unless otherwise noted.