Executed by performing two half-circle backward (or full circle, depending on the game version) motions and pressing all three punch buttons, Balrog angrily lunges at the opponent with a threatening facial expression, attempting to grab his opponent.

If successful, he performs a series of illegal-in-boxing moves: he grabs them by the head and instantly headbutts them off-balance, then proceeds to violently stomp on the opponent's foot and finishes them off by whiffing a cross punch, delivering a powerful elbow strike across their face instead. The opponent is knocked down just as Balrog puts his arms out, shrugs in a "Don't look at me!" manner and laughs sadistically.

As a grab, the Ultra Combo has very limited range, and since it isn't instant activation it can be jumped out of in a neutral stance, and does relatively low damage if landed. Its lack of utility means that it is used far less often in comparison to Balrog's other Ultra Combo. Despite the low damage, it does a lot of stun damage, meaning that it can be used as a combo finisher to render opponents dizzy. 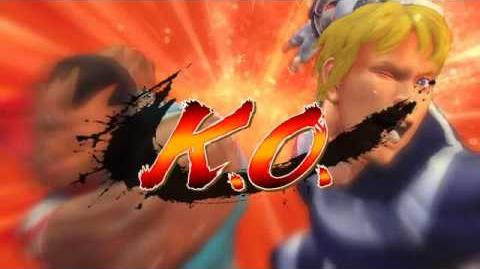 Balrog Nails Rose with a headbutt.

Full sequence of the attack

Add a photo to this gallery
Retrieved from "https://streetfighter.fandom.com/wiki/Dirty_Bull?oldid=233820"
Community content is available under CC-BY-SA unless otherwise noted.