Executed by pressing Heavy Punch and Heavy Kick simultaneously, Cody raises his arm up, which causes a pipe to appear in his hand. While this V-Trigger is active, Cody gains access to several new attacks with the pipe. If his entire V-Gauge is consumed, Cody still keeps his weapon. Performing another attack that involves the pipe after his V-Meter has been depleted causes him to lose his weapon. Additionally, Cody cannot perform Tornado Sweep while he is holding the pipe.

Similar to his first V-Trigger, Cody's Heavy Punch attacks are also significantly changed. While the startup frames of his Heavy Punch normals are slightly increased, they have a longer reach. His Standing Heavy Punch can be used to fish for Crush Counter hits. While his Standing and Crouching Heavy Punch are negative on block, his normals can be difficult to punish if properly spaced. Each standing, crouching, and jumping punch normal involve some kind of attack with the pipe; including some post-attack animations.

One attack in particular that's buffed is his Axel Knuckle. Besides the slight increase in damage, his overhead has longer range because of the pipe. While it is still -7 on block, Cody can still be safe if used at max range, thanks to the extended reach from the weapon. In addition to the buffs to his Heavy Punch attacks, Cody can also perform additional attack while this V-Trigger is active or while he has the pipe.

Secret Work is executed by pressing Light Punch and Light Kick, (the throw command) near an opponent. Cody first grabs his opponent by the head and delivers a knee strike to the midsection. He then shoves his opponent backwards with his shoulder. As his stumbling opponent recovers, Cody swings the pipe down on top of their head, causing them to fall face-first to the ground. He then follows up by bashing his opponent three times on the ground. If no directional input or button is pressed, Cody looks in both directions and shrugs before dropping back to his stance.

While a few characters in Street Fighter V have a third grounded throw, Cody is the only one that has a throw that's exclusive to his second V-Trigger. It inflicts the same damage as his forward throw, while dealing the same stun as his back throw. Unlike most of Cody's V-Trigger attacks, this one does not consume any V-Gauge when performed.

Gentle Swing is executed by pressing Heavy Punch and Heavy Kick simultaneously while holding the pipe. Cody swings his pipe, similar to swinging a baseball bat. This move is one of Cody's most versatile attacks that's exclusive to his second V-Trigger. It is -2 on block, making it difficult for his opponent to punish. Gentle Swing inflicts good damage. This move is mainly used to end combos. It can be cancelled from all of Cody's normals and special moves, including his Critical Art.

Not only Gentle Swing results in a knockdown, but Cody can also cancel into Bean Ball to immediately put pressure on his opponent's wake-up. The descending rock keeps them on their heels, giving Cody excellent frame advantage and an opportunity to break through his opponent's defenses with throws or his command grab. This attack is also effective against zoning characters. Gentle Swing can reflect fireballs, including EX projectiles and Critical Arts. However, using this move costs about 1/3 of his V-Gauge. Cody can also not perform Tornado Sweep while he's holding the pipe. Additionally, Gentle Swing cannot be performed if his entire V-Meter is completely depleted.

Gentle Upper Swing is executed by pressing down, plus Heavy Punch and Heavy Kick simultaneously while holding the pipe. Cody swings his pipe upward at a 45° angle. This attack is one of Cody's anti-air attacks exclusive to his second V-Trigger. While it inflicts the same damage and stun as the ground Gentle Swing, the range makes it an excellent anti-air tool. This attack is mainly used to extend combos. On hit, it puts the opponent in a juggle state, allowing Cody to follow up with another Gentle Swing.

This attack shares many similarities to the ground Gentle Swing. Besides reflecting all kinds of projectiles, it can be cancelled from all of Cody's normals and special attacks. It also results in a knockdown. Cody can then immediately cancel Gentle Upper Swing into Bean Ball to maintain pressure on their wake-up. However, this move is -6 on block, making it easier for his opponent to punish. He also cannot perform Gentle Upper Swing if his entire V-Gauge is completely consumed. 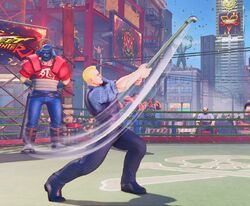 Bean Ball is executed by performing a quarter-circle back motion and pressing punch with the pipe. Cody pulls out a rock and tosses it up. This is Cody's tool against his opponent's wake-up. If they quick or back rise, it can be hard for them to counter since they must respect the descending rock. Cody can cancel this move from his normals and special attacks. However, it is mainly used to set up his projectiles. The strength of the button pressed determines the distance of the toss, although the difference is minuet. Tossing the rock does not consume V-Gauge. This allows him to toss as many rocks as desired to keep his opponent on their heels and at a distance. Once again, Cody cannot toss any more rocks if his whole V-Gauge is depleted. 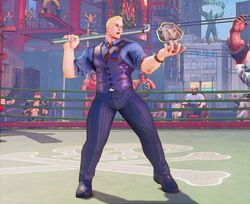 Present Delivery is executed by performing a quarter-circle back motion and pressing punch, followed by pressing Heavy Punch and Heavy Kick simultaneously while holding the pipe. After tossing the rock, Cody swings his pipe to hit the rock, similar to hitting a baseball with a bat. Because he cannot perform Tornado Sweep while holding the pipe, Present Delivery becomes Cody's primary zoning tool. Unlike other fireballs, this attack requires precise timing that determines the projectile's flight path, damage, and properties.

If Heavy Punch and Heavy Kick are pressed too early, the rock flies at an arch toward his opponent at a decent speed. Pressing too late results in Cody hitting the rock to the ground, causing it to bounce toward his opponent. Hitting the rock with perfect timing results in the projectile flying straight toward the opponent. Not only it travels faster across the screen, but it also hits the opponent three times, inflicting more damage. Additionally, a perfectly timed Present Delivering cannot be reflected back. 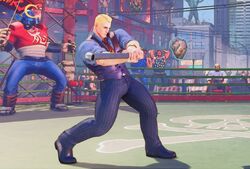 Unluck Gift is executed by performing a quarter-circle back motion and pressing punch, followed by pressing down plush Heavy Punch and Heavy Kick simultaneously while holding the pipe. After tossing the rock, Cody swings his pipe upward to hit the rock toward the sky. After a while, the rock drops down and bounces twice before disappearing. Unlike Present Delivery, the timing for this move is more generous. It is mainly used to set up or extend flashy combos or to surprise the opponent with a descending, yet unseen projectile 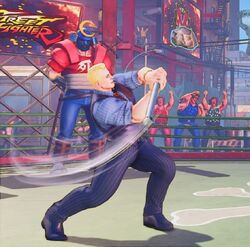 Toss & Smash is executed by performing a half-circle back motion and pressing kick with the pipe. Cody grabs his opponent by the sides and hoists them high in the air. As his opponent descends, Cody grabs his pipe with both hands, winds up, and delivers a massive swing that sends his opponent flying across the stage and bouncing off of the wall. Like Present Delivery, this move requires precise timing to get the most damage and stun.

If Heavy Punch and Heavy Kick are pressed too early or too late, Cody's swing sends them spinning across the stage. While it results in a knockdown and decent damage, a mistimed Toss & Smash resets the neutral game. Not only a perfectly timed command grab inflicts massive damage and stun, but it sends his opponent bouncing off of the wall and landing right at Cody's feet. This allows him to continue pressure by performing Bean Ball. Because this move is a command grab, it cannot be blocked.

Cody's Standing, Crouching, and Jumping Heavy Punch with the pipe.

Cody lifting his opponent for Toss and Smash.
Add a photo to this gallery

Toss & Smash SFV
Add a photo to this gallery
Retrieved from "https://streetfighter.fandom.com/wiki/Dirty_Coach?oldid=217097"
Community content is available under CC-BY-SA unless otherwise noted.