Dive Kick is a universal term for a certain style of attack in the Street Fighter series.

Dive Kick is used to describe attacks that do the following:

Dive Kick users usually tend to have more floaty jumps so that they could take advantage of the trajectory change their dive kicks provide and possibly discourage anti air attempts.

Characters that happen to have a Dive Kick usually have more restrictions with their own versions. This can include restrictions like;

These characters usually are intended to occasionally use their Dive Kicks for tactics like fake crossups. they also tend to be Special Attacks to further hinder their usefulness.

Dive Kick characters tend to have their Dive Kicks be Unique Attacks for easier input and usage. These tend to be more flexible than characters who happen to have Dive Kicks. The hitboxes tend to be weaker with these characters (like Rufus's Falcon Kick's hitbox is actually behind his leg) and occasionally the hurtbox of the character is optimized to avoid lows.

Dive Kick characters tend to use their dive kicks in more than 1 way during a match. Some of Yang's higher level combos actually require Yang to jump and whiff a low dive kick to continue his sequence. At some spaces Rufus can wake up with his Falcon Kick to avoid a throw then do his own throw or combo.

It must be noted that there are some attacks that tend to have properties similar to dive kicks like Devil Reverse and Divebomb. These attacks tend to lack the versatility and safety divekicks usually (but not always) provide. 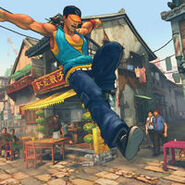 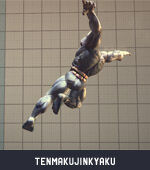 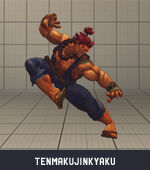 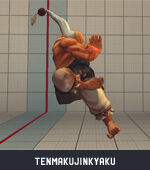 Example of Cammy's Cannon Strike applied during a combo in Street Fighter X Tekken
Add a photo to this gallery
Retrieved from "https://streetfighter.fandom.com/wiki/Dive_Kick?oldid=202046"
Community content is available under CC-BY-SA unless otherwise noted.