Doctrine Dark wears a black oral Continuous Positive Airway Pressure (CPAP) mask for respiratory breathing and sleep apnea prevention (due to Rolento severely crippling him on the chin with his baton), as well as a tactical-militia uniform that resembles S.W.A.T. gear, but also features a symbol of a sliced scorpion on the back of his black Tactical Multi-Threat Vest Level IIIA, he uses various weapons such as fiber wire, hidden blades and "EX-Plosive" devices. He has a short blonde hair parted at the fringe (known as "The Curtain Haircut"), and characteristically unsettling, permanently shell-shocked blue eyes to show his mental instability.

In Fighting EX Layer, Doctrine Dark's suit gets a mechanical upgrade, with much of his body now being covered in weathered blue armor with glowing orange highlights. His concealed knives are now cloaked in purple energy thanks to Garuda's influence.

Due to his Post-Traumatic Stress Disorder (PTSD) that reflects in his physical looks, he is quite serious and homicidal in battles and will not think beyond killing his opponent rather than simply defeat them. He has a single-minded desire to exact revenge on Rolento and Guile and does not seem to have any other desires beyond this.

While obviously inspired by the simultaneous rise of ultra violent and brutal fighting 1990s games like Mortal Kombat, specifically to characters like Scorpion, Baraka, Kabal, and Cyrax, in consideration with the 1970s themed roots of the Street Fighter EX cast, Doctrine Dark may also likely be inspired by the German American US Navy pilot and Vietnam War POW Dieter Dengler, whose arduous escape from a Pathet Lao prison camp is among the better known stories of the Vietnam War. Conversely, the Vietnam War is notorious for being a conflict with the highest PTSD and mental illness turnouts among veterans in the US Armed Forces; while not the most severe case, Dieter's last half of his escape had him hallucinate due to malnutrition and trauma, and was reported to have had violent night terrors upon recovering in rescue. 1990s US popular culture tended to depict the less fortunate or more unhinged afflicted veterans as prone to PTSD symptoms, and in the worst case, as serial killers, which is further reflected by Doctrine Dark.

His later appearances are similar to that of the character Garland Greene from the 1997 action movie Con Air, played by Steve Buscemi: Greene was infamous as a serial killer known in-story as "The Marietta Mangler", and was first depicted in a full-body restraint device with a respirator face mask due to his dangerous level as a convict.

Other than his begrudged desire for Rolento and Guile's deaths, he has no other known interactions with other characters.

The man responsible for his current condition. Both men and their units fought in a brutal melee with numerous casualties, and this is why Dark wants Rolento dead.

Believed to have been betrayed by his superior for not helping him during Rolento's onslaught, Dark has likewise marked Guile for death.

D. Dark is unknowingly being manipulated by Garuda's dark powers.

Doctrine Dark was once a brave soldier with an exceptional sense for battle. Dark once served under the orders of Guile with his own special tactical reconnaissance unit. During his tour of duty, his own unit got into a bit of a scuffle with another rival unit, lead by Rolento. The minor scuffle escalated into a full-on battle, with both sides receiving heavy casualties. Doctrine Dark was the only member of his unit to escape. However, he was severely injured emotionally and physically. Outfitted with a portable breathing apparatus, he eventually escaped from the hospital and went into hiding, only to re-emerge as the deranged psychotic killer Doctrine Dark. Dark holds Guile responsible for the massacre of his unit. He blames Guile for not training him well, whom he accuses of being more concerned with chasing after M. Bison to avenge Charlie than with the safety of his own men. For these reasons, he seeks to kill Guile as a result.

"Resistance is futile. You guys won't do it again. I have lost my soul, as well as my tears and my smiles. Now you will bear witness to that hell? Where did they go...? You...?" Doctrine Dark, the man that was once known as Holger. Can his soul still be saved?

A lone shout rules his mind. His strong desire for vengeance has burdened him with the fate of a warrior demon. His shout echoes like a requiem during the sorrowful night. The vengeful demon Doctrine Dark... Is there anyone who can save his soul?

Dark knew it. The surviving soldiers who were still on this world were just like the ones he saw within the nightmarish training camp of his youth. Just like him, they were tragic people who managed to survive by killing others.
His mind and body won't rest until the day when he's the only one remaining. Unfortunately, Dark already considers every other men besides himself to be his enemy.
"The stronger you are, the greater the pleasure I will get from defeating you..."

"Who am I...? What should I do..?"
His everyday battles were tearing up his mind, rejecting the mental world, even as he was trying to comprehend things inside his head.
Is the light of his passing day gone for good?

When he realizes that he will always live in cold and solitary darkness, Dark tries to think about his childhood. His mind remembers those lonely times when he was child crying out loud and then whispering, "Darkness... deep darkness... is covering the ceiling..." When Dark comes to, he noticed a pile of bodies around him. Insanely he laughs, "Ha ha ha ha ha! This is the power of darkness..."

Born in the United States and of German heritage,[1] he was assigned to a special force with great expectations about his future. However, his unit was exterminated by an ambush from Rolento's enemy troops and he was the sole survivor. Filled with hatred for both Rolento and his former superior Guile, he has now become a killing machine burning with a desire for revenge, wanting to win by any means necessary.

Doctrine Dark appears as one of the playable characters in this game.

Doctrine Dark begins to lose his mind and became completely insane. He now possesses an insatiable desire for strength. He obsessively wants to beat powerful warriors in the shadows while he became Gougi's prisoner to take their lives. Unaware that he was under Garuda's control from his dark energy.

Dark's signature move is a wire that catches the opponent, and can either drag them in for a combo or electrify them. He also makes use of concealed blades and explosives.

His throw move, in uncensored versions, involve him graphically slitting his opponent's throat from behind in spectacular bloody fashion. This was toned down in other regions to simply him planting explosives.

In Fighting EX Layer, Dark retains all of his moves from the Street Fighter EX series. His wrist mounted daggers resembles the dual katar blades which are glowing in red as well as his wire is glowing in purple. The glowing weapons that Dark wields is due to Garuda's control by the use of dark energy. 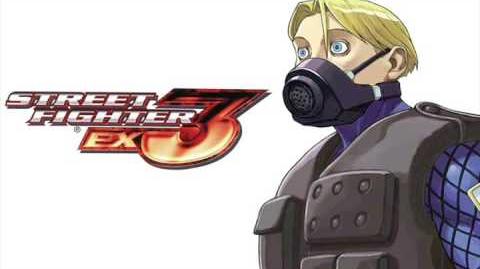