Don Sauvage is seen as the announcer in Zangief's prologue story, in the CWA match from the Story Mode, and in the background of the High Roller Casino stage. 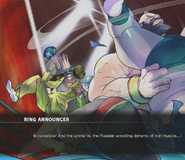 Retrieved from "https://streetfighter.fandom.com/wiki/Don_Sauvage?oldid=142123"
Community content is available under CC-BY-SA unless otherwise noted.