Edmund Chen (Street Fighter: The Legend of Chun-Li)
Dorai (銅昴, Dōrai?)[1] is the father of Chun-Li who disappeared during a mission to uncover the drug-trafficking arm of Shadaloo. It is implied that he was killed by M. Bison, which is the source of Chun-Li's vendetta with Shadaloo. However, his body has never been found, so his ultimate fate cannot be confirmed.

His name originally came from the Street Fighter II V anime series (before he was only referred as "Chun-Li's father"); it wasn't until after Street Fighter V that his name started being used in the games.

Dorai was a martial arts master known to be good friends with Gen, and both he and Gen trained the former's daughter Chun-Li in martial arts from an early age. He was a Hong Kong police officer with a strong sense of justice. During an investigation to capture the leader of the crime organization Shadaloo, he went missing, and his whereabouts are currently unknown.

So far, Dorai has not made any proper appearance in the main series of videogames; prior to a supplemental database related to Street Fighter V, his real name, appearance and personality were completely unknown within the games' canon, and everything known about him was mentioned in other characters' backstories, such as those of Gen and Chun-Li.

His first appearance in other related media is very brief. Dorai appears in a flashback scene where M. Bison mentions his fateful destiny. In this scene, he is seen falling from a great height in a nondescript location while desperately shouting.

Dorai is given a brief mention in the film. Chun-Li confronted M. Bison over his murder, accusing him of shooting Dorai as Bison's forces retreated from a failed takeover of Dorai's village. This prompted the dictator to dismiss the accusation with his now-infamous response: "For you, the day Bison graced your village was the most important day of your life. But for me... it was Tuesday.".

Dorai has a significant role in the animated Street Fighter II V series. Here, he is depicted as a strong, hardworking man who is very protective of his daughter. His principal occupation is as the Vice Squad Captain for the Hong Kong Police Department, which is routinely engaged in drug busts, sting operations, and various other police activities; as such, Dorai is no stranger to the risks of his work. His residence also doubles as a temple and training ground where he teaches his daughter and several other students, including Fei Long.

Shortly after a successful bust of a large cocaine-smuggling operation, as well as the subsequent arrest of the Ashura kingpin behind it, Inspector Dorai is called to Barcelona to attend an Interpol conference concerning the investigation of the mysterious organization called "Shadowlaw" (i.e. Shadaloo). During the investigation, Dorai is nearly killed by Cammy at the order of a Shadowlaw infiltrator, but his survival was kept secret by the Chief of Interpol until the person who ordered the hit (eventually found to be Balrog) could be identified. Meanwhile, Dorai is treated in a hospital where Fei Long protects him, even as Cammy invades his room in an attempt at finishing the job - eventually, after a short fight with Fei Long, Cammy realises the truth and turns on Balrog, leaving Fei Long to take care of Dorai.

In the Street Fighter 1995 cartoon series Chun-Li's father was shown in the episode, The Strongest Woman in the World in a flashback Chun-Li has of M. Bison attacking their village one night. He was the only one who didn't run away from the village and fought M. Bison. Chun-Li was still in her nightgown when she saw M. Bison kill him. In this series, it is shown that he knows the Spinning Bird Kick.

Dorai appears in Street Fighter Legends: Chun-Li. As in the anime series, he works with the Interpol, but also acts as a double agent who had infiltrated the ranks of Shadaloo. Initially, Dorai shows concern about the idea that Chun-Li would follow in his footsteps, but then he ponders that his daughter has already grown up into an adult capable and skilled enough to act responsibly. It is mentioned that his and Gen's families had a long friendship, although both were estranged in recent years due to the incompatibility of the "occupations" they were engaged in.

In the mainline series, one of the many short stories reveals that he was sedated and kidnapped by Shadaloo henchmen with the help of the then brain-washed Cammy, who also took measures to prevent Chun-Li from following or attempting a rescue.

Finally, during the main story, when Charlie regains his memory, he reveals that after being defeated by M. Bison, he witnessed the Dolls attack Dorai simultaneously, with the Killer Bee (Cammy) delivering the fatal blow at the direct command of Bison itself.

Dorai is referenced in the comic crossover of Street Fighter vs. Darkstalkers.

Street Fighter: The Legend of Chun-LiEdit

In the live-action film, Dorai is renamed (or possibly replaced by) Xiang, portrayed by Edmund Chen as a well-connected businessman. 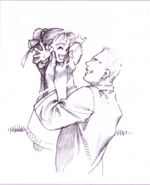 Dorai fighting for his life against all the thirteen Dolls depicted in the UDON comics. 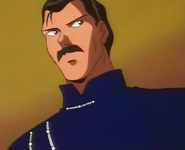 Flashback of Dorai in the Street Fighter II: The Animated Movie
Add a photo to this gallery

Retrieved from "https://streetfighter.fandom.com/wiki/Dorai?oldid=220421"
Community content is available under CC-BY-SA unless otherwise noted.