Edition Select allows players to choose between different versions of a single character, across a single game series. However, it is only possible to select a character in a revision he/she was actually in.

The first game to include an Edition Select feature was Street Fighter Collection 2, where it was an unlockable mode known as Super Vs. Mode. There, the player could select between characters from the first three arcade versions of Street Fighter II (The World Warrior, Champion Edition, and Hyper Fighting). 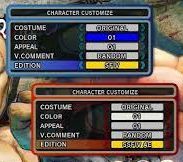 Ultra Street Fighter IV
Add a photo to this gallery
Retrieved from "https://streetfighter.fandom.com/wiki/Edition_Select?oldid=140453"
Community content is available under CC-BY-SA unless otherwise noted.