"I׳m the hurricane of the gulf of Mexico! My name is El Fuerte!"
—El Fuerte

El Fuerte (エル・フォルテ, Eru Forute?) is a video game character from the Street Fighter series, first appearing in Street Fighter IV. He is a Mexican luchador and chef, traveling the world in an effort to perfect his lucha libre skills and hone his cooking abilities.

El Fuerte is a short, but very muscular Mexican man. He dresses in typical luchador uniform with black elbow pads on his arms and a gold sash on his waist. He wears short, white tights buttoned up to his thighs, with three blue stars on his rear. El Fuerte also wears white, laced, wrestling boots with golden soles. His mask follows the pattern of the rest of his outfit, being white with gold trim and having three blue stars on his forehead.

El Fuerte's brown hair sticks out of his mask in a flared out ponytail-top, and also also reaches out of the bottom of his mask.

El Fuerte is a hyper, easily excitable fighter who constantly thinks out loud about new recipes even during a fight. He frequently seeks inspiration from other fighters he meets because of their various origins across the globe, much to the annoyance of some, but to the amusement of others. His cooking has mixed results. In the games, he frequently whips up unusual combinations after becoming overexcited from all the ingredients he gathered while abroad. In the UDON comics, his cooking ideas are more conventional.

It is possible that El Fuerte's backstory is inspired by Jack Black's title character (who is in turn, based off real-life Luchador Fray Tormenta) from the film Nacho Libre, who is a terrible chef who decides to become a luchador, although said title character improved as a cook during the film, as he earned more money for better ingredients.

It should be noted that it is not uncommon for luchadores to run businesses outside the ring, and a few of them like Shocker and Super Astro do indeed have restaurants.

Concept artwork for Street Fighter IV showed El Fuerte wearing a scarf around his neck instead of a sash around his waist. One of his concept alt. costumes looks similar to that of WWE wrestler Rey Mysterio, specifically the attire used during his Wrestlemania 22 entrance.

El Fuerte appears to have a friendly relationship with T. Hawk. Though never explicitly mentioned, it is possible that El Fuerte may have been a former member of (or at least familiar with) T. Hawk's tribe; dialogue during their rival battle indicate that El Fuerte has known T. Hawk for a long time and is acquainted with other members of the tribe ("How's the chief doing?", "Strong as ever!", "How's Julia these days?"). It is also possible that T. Hawk may have trained El Fuerte or at least advising him on fighting techniques ("It's like I've always told you, it takes more than just strength to win").

El Fuerte was brought up in the ways of Lucha by the teacher who also taught El Stingray, the legendary wrestler; Meteorito Jr..[3]

El Fuerte's role in the game's story is minimal. He joins the tournament to fight the other champions and discover what they eat and also test his lucha libre skills. Along the way, he meets Zangief, who is his rival, and fights to see if "A hurricane is stronger than a cyclone.".

El Fuerte's ending finds him asking what recipe is suitable for a great hero. E. Honda and Zangief suggest their favorite food (Chankonabe and Borscht, respectively). El Fuerte then suggests and mixes them together and adds some chili peppers and some lemon. The results apparently tasted foul, as Honda and Zangief's faces turn blue with disgust. Then an oblivious El Fuerte proclaims the food "tastes so great it sends you straight to heaven!".

El Fuerte's story is similar to his Street Fighter IV story. He joins the tournament believing that "the ultimate fighter, deserves the ultimate menu!", and that winning the tournament will have him "reach the stars of ultimate delicacy!".

El Fuerte's ending has him in the kitchen, cooking, with a fellow cook asking about what the green liquid next to El Fuerte's is. Claiming it was spoken about by "a sumo-wrestler friend", it is revealed as Aojiru, and he praises its nutritional qualities, but questions why the Japanese call it "blue juice" when it is green.

The cook asks why he's putting it in the chili soup, and a close-up shows many other assorted objects in the pot, including fish-bones. El Fuerte's reasoning is that "adding one delicious thing to another delicious thing always equals... more deliciousness." With this in mind, he adds some chocolate he got from "that French mercenary", which causes the fellow cook to snap and shout that he's only making the dish worse.

El Fuerte appears in UDON's Street Fighter IV comic which focus on the game's newcomers (himself included). El Fuerte is shown to be a huge fan of R. Mika; in one scene, one of her matches is being shown on TV at a restaurant. T. Hawk requests that the channel be changed, since he can't stand pro wrestling; this prompts El Fuerte to burst from the kitchen and yell at T. Hawk. In the panel, Mika's image visibly adorns every piece of El Fuerte's cooking attire, and Fuerte is also shown to keep a lot of Mika themed knick-knacks around, such as lunchboxes, posters, figurines, etc.

El Fuerte fights using Lucha libre (also called Mexican wrestling) which is best known for it's masked performers and acrobatic techniques. Fighters adopt an alter ego to use in the ring, similar to the concept of a superhero. Much like American pro wrestling, lucha libre is a mix of grappling and physical strikes, but with a larger emphasis on airborne attacks.

El Fuerte is one of the fastest characters in the Street Fighter IV series. As his total vitality is low, the player must keep their opponent in a guessing game, as his Habanero Dash has many follow-ups that can overcome certain blocks and counters. Similar to Vega, El Fuerte is a very agile character. He can wall jump to escape corners and counter poorly-timed attacks with blinding speed. The player must keep El Fuerte in a consistent rhythm to overwhelm the opponent. 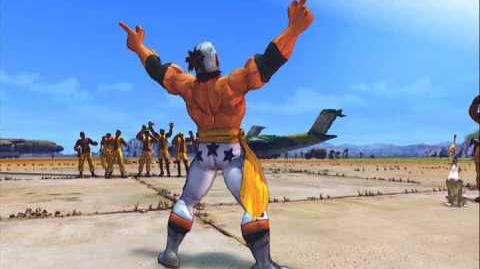