Elbow Drop (肘 落としHiji Otoshi) is one of Guy's and Poison's unique attacks. This attack was introduced in the Street Fighter Alpha games where it had another name, Hiji Otoshi.

Executed by directional down and pressing medium punch while jumping, Guy will perform an attack with the elbow as it descends toward the opponent.

Executed by directional forward and pressing medium punch, Poison will perform a small jump forward and will make an attack with the elbow at the opponent.

Guy can use Elbow Drop to not only escape punishment but also to punish, it is very difficult to make a combo. Poison can use the attack to punish the opponent and make combos with it, she can use it after an EX Whip of Love or before Thunder Whip and Whip of Love. 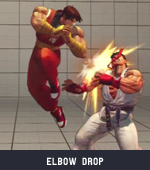