Dogs[1]
Elick (エリック, Erikku?) is a Final Fight character who first appeared in the Capcom game Final Fight 2. He is one of the minor enemy characters who face the player characters.

Elick is a short, fat man who wears a white ball cap and uniform over a black undershirt. He also wears goggles and wristbands and carries a portable generator or battery to which two fork terminals are attached.

Elick longed for his father, who worked for a power station in Metro City, so he studied electrical engineering by himself. He likes doing mischief, being mischievous since his childhood. He frequents an aerobics gym without letting his fellows know about it.[1]

In Final Fight 2, Elick is a member from the Mad Gear Gang, participating in their criminal actions.

Around the time of Street Fighter V, Elick has been hanging around with local fellows, apparently having a hand in wrongdoings.[1]

Elick attacks by swinging his forks or holding them out and charging. Using his homemade generator,[1] he can also electrify the forks, causing additional damage to any enemies he hits and knocking them down instantly. 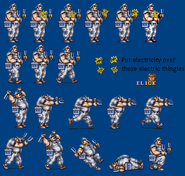 Elick, as he appears in Final Fight 2