Street Fighter Wiki
Register
Don't have an account?
Sign In
Advertisement
in: Articles in need of improvement, Articles with incomplete sections, Games,
and 2 more

Final Fight Revenge (ファイナルファイト リベンジ, Fainaru Faito Ribenji?) is a fighting game for the arcades and Sega Saturn featuring most of the original Final Fight cast.

Final Fight Revenge is very similar to Street Fighter with the same mechanics such as the "Super Bar" and the "Stun" mechanic (which is done by hitting the opponent multiple times successfully or getting hit by Belger's vomit attack once). What differs Final Fight Revenge from Street Fighter is Weapons which can be picked up and used against opponents for melee or ranged attacks. There are different types of weapons like the Poison Claw which increases rang in attacks and increases Poison's attack power, or the Freeze Gun that freezes opponents, the Bow Gun which launches fire arrows can be used for rang, or the War Hammer which can easily stun opponents. Some characters even start of the match with their signature weapon such as Sodom and his Katana, Edi. E and his Police Stick and Rolento and his Staff. But, if the character with a weapon is hit even if they're the character who starts with the weapon will drop it then the other character can pick it up and use it against them.

The main plotline is that riots have broken out in Metro City and Jessica Haggar has gone missing amidst them. Additionally, some of the original Mad Gears are trying to reform. Although Jessica's whereabouts are never resolved in any of the characters' endings, it has been stated by the developers that she was rescued by Mike, and after that she broke up with Cody and left Metro City to study in Europe. While this game's canonical status is questionable, it does attempt to provide some context for the drastic change in personality and costume that Cody underwent when he became playable in the Street Fighter series.

The game was designed by the Japanese division of Capcom but programmed by the American division (later known as "Capcom Production Studio 8"), which later produced other games for the PlayStation 2 such as Maximo: Ghosts to Glory and Final Fight: Streetwise. 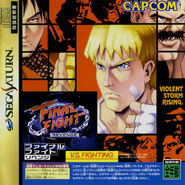