Executed by performing a quarter-circle backward motion and pressing punch, Mika leaps straight up into the air, then shouts "Bomber!" (ボンバー, "Bombaa"?) as she launches herself, buttocks-first at the opponent. 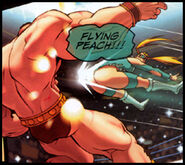 R. Mika using Flying Peach against Vega in Street Fighter V.
Add a photo to this gallery
Retrieved from "https://streetfighter.fandom.com/wiki/Flying_Peach?oldid=205381"
Community content is available under CC-BY-SA unless otherwise noted.